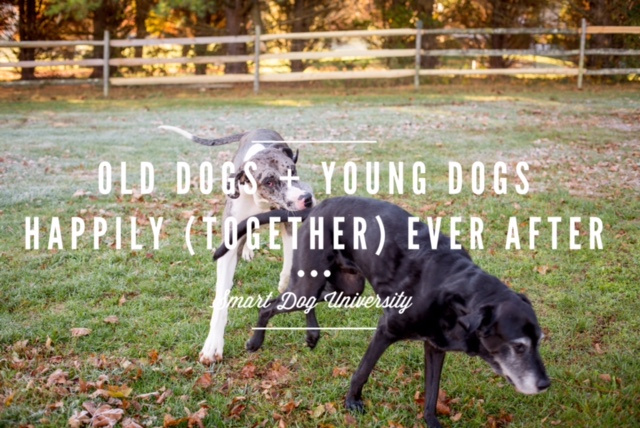 In our household, we’ve got a 165 pound, three year old Great Dane living with our 55 pound, 14 year old Labrador. Size difference alone is enough to give any owner pause, but when the 55 pound dog is ancient in dog years, the concern escalates. This month’s newsletter focuses on what you should be looking for if you’ve got an significant age discrepancy in your household, as well as some easy changes you can make to ensure that both the older and younger dogs’ needs are being met.

Regardless of size differences, there are some big differences between young dogs and old dogs.

Older dogs, just like older people, frequently suffer from generalized aches and pains that their younger counterparts know nothing about. Sore backs, necks (I can identify with that), and hips mean that the older dogs might not be so fond of physically rough play such as body slamming, hip checking, and paws to the face and back. When the older dog snarls at the younger one, she’s not just being grumpy – she’s in pain and grumpy because of that pain.

Young dogs wake up ready to go, go, go! And they can GO! all day. When we were raising service puppies, I could barely get up from my office chair before the young dog was up, tail wagging, ready for the next adventure – even if it meant we just went to the bathroom. Older dogs generally have less endurance than the younger ones – they often don’t like to play as hard or for as long. The fabulous game of “chase me, I have your favorite toy!” is fun for five minutes to the older dog, not the 45 minutes that it is to the younger dog.

Older dogs can often be happy with strolls around the neighborhood, whereas young dogs often find even 3+ walks a day just absolutely boring! The younger dogs may need 3-hour adventures through the woods, or a 3 mile cross country run. Some older dogs still like to engage in play, but it’s often a different version of play than that of a younger dog. Older dogs sometimes enjoy a low-key version of the “chase and be chased” games, while some younger dogs like a more physical game like “run and jump on heads.”

What to look for

If you’ve got older and younger dogs living together, it’s important to keep your eyes open for the signs that indicate your older dog isn’t happy. Here are some of the more common signs of discomfort or stress:

I think having multiple dogs is the greatest thing about living with dogs. I cherish every minute I have with my oldsters and I love the levity and laughter that the young dog brings to the household. I am always aware, though, of the happiness quotient over the old guys and girls. They’ve lived long, good lives – the old dogs deserve to spend their senior lives comfortable and happy.

Should you get littermates? I don't usually get this question. Normally, I hear "Help, we got littermates!" That comes after the littermates are already home and the people are feeling understandably … END_OF_DOCUMENT_TOKEN_TO_BE_REPLACED

Working in the veterinary field has shown me how important positive reinforcement training for dogs is. When it came time to train my own dog, Quincy, Smart Dog University was my choice for training. Laurie is a calm force and true dog lover! Two yea… END_OF_DOCUMENT_TOKEN_TO_BE_REPLACED

Laurie is someone Your Dog’s Friend depends on for good information on dog behavior and training presented in an engaging, understandable way. She has done free workshops for us; we have used her articles in our newsletter; and she is a trainer who… END_OF_DOCUMENT_TOKEN_TO_BE_REPLACED

Our family used Laurie Luck and Smart Dog University for training both of our very active labs. Laurie was amazing at helping our entire family learn to train and work with the dogs. The most helpful thing for us about both the group classes and in-h… END_OF_DOCUMENT_TOKEN_TO_BE_REPLACED

Laurie’s group class was perfect for my distractible social butterfly pup (aptly named Zippy)! Her positive training methods make learning as much fun for the humans as for the dogs. Training is a lifelong (daily) bonding adventure, with Laurie’s… END_OF_DOCUMENT_TOKEN_TO_BE_REPLACED

When Laurie took over the training of my 9-month old puppy, he had already been through 2 rounds of puppy school. Obviously, they had been failures. Laurie showed us how to get him under control using positive reinforcement as his main reward. He now… END_OF_DOCUMENT_TOKEN_TO_BE_REPLACED

Gracie participated in two classes. Laurie is very knowledgable about dog training, very patient with owners and clearly loves her work. I especially remember the lesson about the settle mat. Laurie kept telling me to “wait, wait, she will figure i… END_OF_DOCUMENT_TOKEN_TO_BE_REPLACED