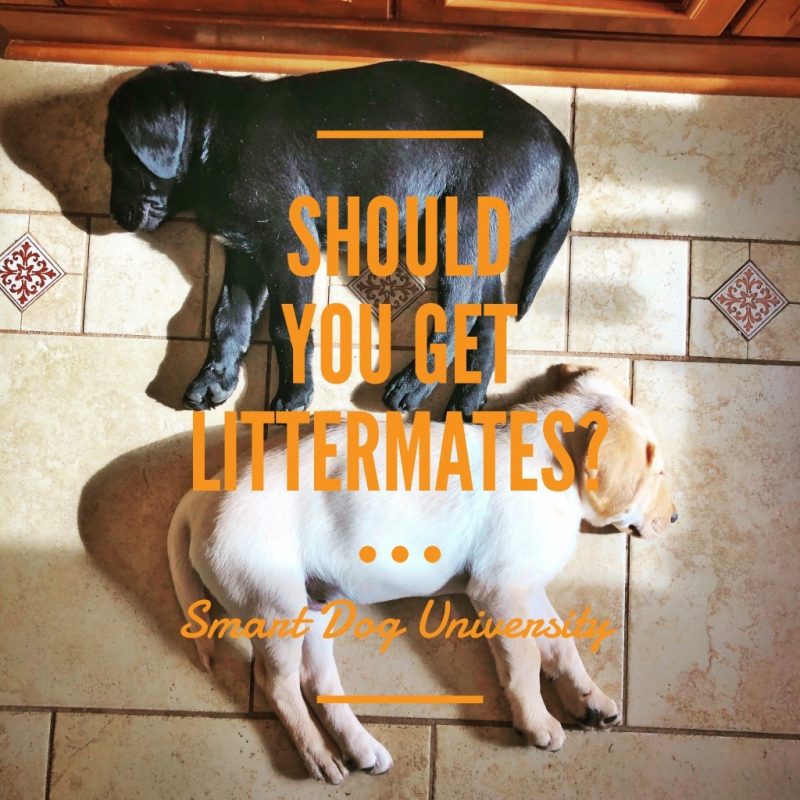 Should you get littermates?

I don’t usually get this question. Normally, I hear “Help, we got littermates!” That comes after the littermates are already home and the people are feeling understandably overwhelmed.

Most dog trainers, if asked, would say “No way, don’t do it! Never get littermates.”

Meanwhile, most dog owners say “We got littermates because…”:

I have discouraged littermates in the past because I know how much work it is to raise, socialize, and train one puppy! Adding a second puppy seemed out-of-this-world bonkers to me.

However. I am right now, at this very minute, raising littermates. Where’s my eye roll emoji?

How did I get here?

I raise puppies for a service dog organization. I love being a puppy raiser. Over the past year, five puppies have come into our house. Three have already come and gone (one to a client who wanted a trained pet dog, the other two are service dogs in their advanced training) and I now have Whit and Dougan. (More of the back story in an upcoming post.)

I’ll be writing more about our progress — the highs and the lows (there are lots of both!).

But for now, here are some things to think about if you are still thinking about getting littermates (or any two puppies under six months old at the same time).

Puppies need to learn how to live independently from one another.

It’s so easy to let the puppies sleep together, eat together, play together, walk together, and learn together. However, that’s a reeeeeallly big problem for the puppies.

Imagine that you had twin children. You might dress them similarly at first, but before long, you would encourage their independence and you’d help each child discover her own preferences, develop her own opinions, and find her own friends. It’s important for human development — the kids will need to go places independently, they will have different interests.

Yet people almost never think about this for puppies. This is where the term “bonded pair” becomes a problem. Go to any dog rescue organization and look at all the “bonded pairs” or “must be adopted together” dogs. This is usually because these two dogs were raised together from puppyhood and never learned how to act without the other dog being there with them.

It’s cute — it’s so very cute — when two puppies nap together. And play. And follow one another.

They are REALLY cute together.

That cuteness turns into an unhealthy dependence on one another.

If you’ve heard of the term “co-dependent,” you know that it generally refers to an unhealthy relationship dynamic. Co-dependency can mean, in a broad sense, someone who cannot function on their own and whose thinking and behavior is instead organized around another person.

That doesn’t sound so healthy. And we seem to be able to recognize and make an effort to prevent this in humans. But when it comes to puppies, it’s almost as if people want their pups to grow up dependent on the other puppy. That’s unfortunate because it’s not a good idea for the puppies or the family they live with.

As I raise these puppies, they are learning how to:

Why is this so important for littermates?

You may never intend that your pups be separated, so what’s the big deal, right?

I feel certain that all those bonded pair dogs on the adoption sites also started out that way — they were going to live their whole lives in that home and with that family.

But life happens. What if:

When puppies grow up together and special attention isn’t paid to training them to lead independent lives, their lives can be limited and unnecessarily stressful.

Stay tuned, I’ll be talking a lot more about what I’m doing to help Whit and Dougan learn how to enjoy life with and without one another. Because for these guys, independent lives are almost a certainty — they will live together only while they are here with me for their training. In less than a year, they will go on to lead independent and very different lives. But even if they weren’t slated for service work, it’s my duty to ensure that they are their own dogs, that they enjoy their own lives, not the life they lead together with one another.

Should you get littermates? I don't usually get this question. Normally, I hear "Help, we got littermates!" That comes after the littermates are already home and the people are feeling understandably … END_OF_DOCUMENT_TOKEN_TO_BE_REPLACED

Laurie is someone Your Dog’s Friend depends on for good information on dog behavior and training presented in an engaging, understandable way. She has done free workshops for us; we have used her articles in our newsletter; and she is a trainer who… END_OF_DOCUMENT_TOKEN_TO_BE_REPLACED

Laurie’s group class was perfect for my distractible social butterfly pup (aptly named Zippy)! Her positive training methods make learning as much fun for the humans as for the dogs. Training is a lifelong (daily) bonding adventure, with Laurie’s… END_OF_DOCUMENT_TOKEN_TO_BE_REPLACED

When Laurie took over the training of my 9-month old puppy, he had already been through 2 rounds of puppy school. Obviously, they had been failures. Laurie showed us how to get him under control using positive reinforcement as his main reward. He now… END_OF_DOCUMENT_TOKEN_TO_BE_REPLACED

Gracie participated in two classes. Laurie is very knowledgable about dog training, very patient with owners and clearly loves her work. I especially remember the lesson about the settle mat. Laurie kept telling me to “wait, wait, she will figure i… END_OF_DOCUMENT_TOKEN_TO_BE_REPLACED

Our family used Laurie Luck and Smart Dog University for training both of our very active labs. Laurie was amazing at helping our entire family learn to train and work with the dogs. The most helpful thing for us about both the group classes and in-h… END_OF_DOCUMENT_TOKEN_TO_BE_REPLACED

The knowledge SDU provided is invaluable. Laurie’s willingness to share her calm logic and vast knowledge and patience about how to raise a happy dog (and happy dog people) has created harmony we did not have before. A big thanks to my sister who… END_OF_DOCUMENT_TOKEN_TO_BE_REPLACED