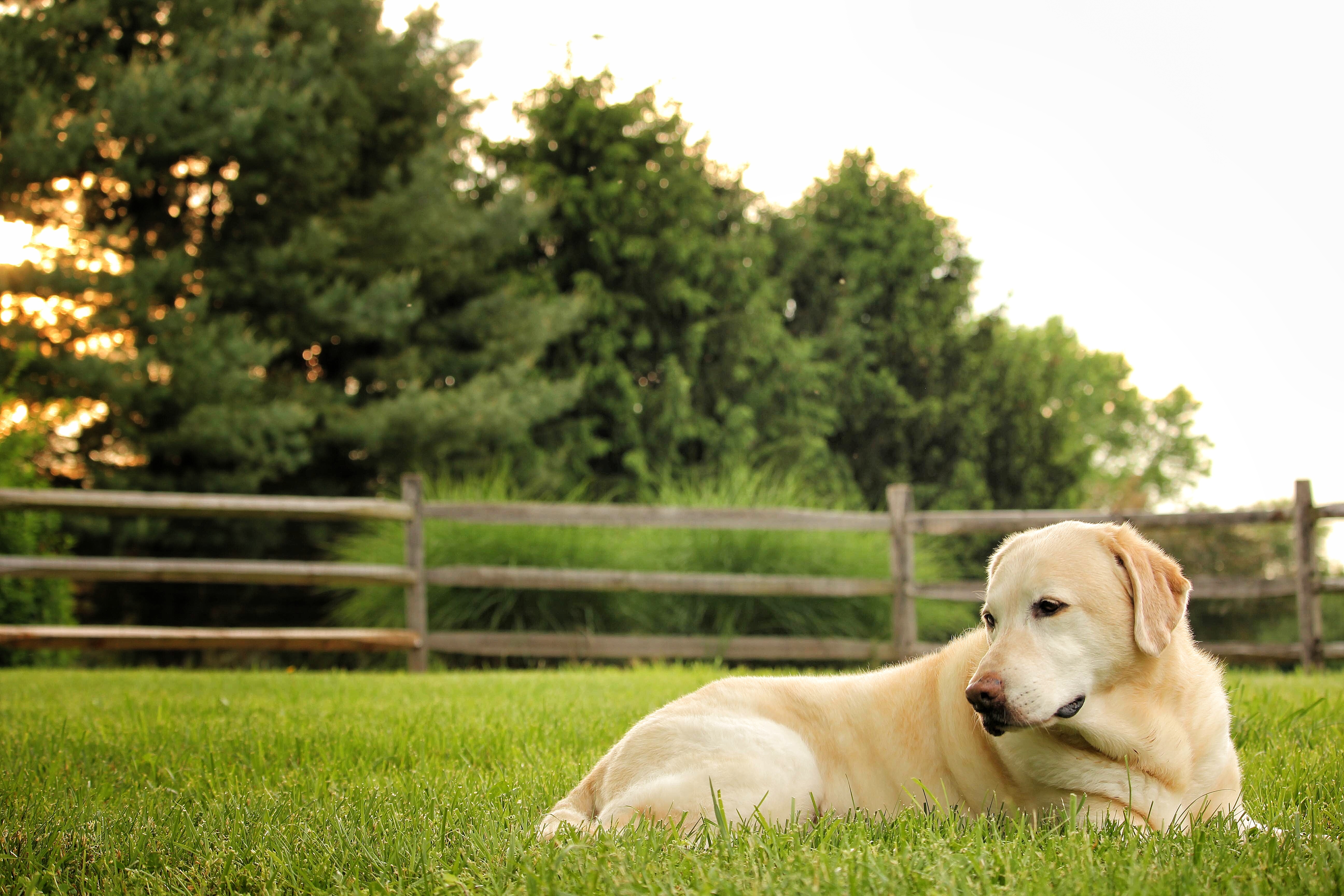 I had planned to write this on January 17 while I was on a cross-country flight to the West coast. I was ready to write it. I had recovered enough that I could form coherent sentences and I’d finally reached the point where I smiled when I thought about Tango.

But then a thing happened that put this post off until now. I am not ready yet to write about that thing, but it’s coming. One thing at a time.

Fifteen years ago today, the best dog ever, Tango (aka Fig) came into our lives. Tango was the third service puppy we raised. He was our first yellow and he was a fun addition to our dog family.

Tango was a surprise. I had gone to the service dog organization for a scheduled check-in and progress update with Lily (our second service dog-in-training) and afterwards, we went to evaluate a potential puppy at a nearby farm.

The kennel knew that at nine weeks old Tango wasn’t going to be a good fit for them (hunting and conformation showing), so they called the service dog agency. He was a steady, solid pup and passed the initial temperament tests so we popped him in the car and brought him back. The director asked if I wanted another pup and without even asking my husband, I agreed.

I was staying the weekend with my parents and when I walked in the door with Lily and this new pup, it was quite a surprise. It also happened to be my dad’s 66th birthday and I walked into the house carrying this little yellow bundle and said “Happy Birthday, Dad!” There were a lot of things my dad might have wanted for his birthday, but a puppy wasn’t one of them. I laughed and, much to my dad’s relief, explained who this new little guy was.

Tango was one of the easiest dogs to train. Because I already had Lily at work as a service dog-in-training, Tango had to stay home for a couple of months. We worked long days, so I set up a big sort of playpen for Tango complete with sleeping area, water, and a bathroom area. We had a neighborhood girl come in to let him out when she got off the bus, but for the most part, he was alone all day. Aside from the time when he had a stomach bug, he never went to the bathroom in the house.

I worked at a government agency and there were about 3,000 employees scattered across a campus of about 20 buildings. Ours was a close-knit community and while I didn’t know everyone who worked there, each face was recognizable. You knew they worked there even if you didn’t know their name. Our Director was a presidential appointee and while I’d gotten approval to bring the service dog-in-training to work, I felt like we were still walking on eggshells. The thought of a new Director terrified me — what if he quashed this trial program and refused to allow dogs-in-training at work?

One day a man got on the elevator with us. He didn’t look familiar, but we made small talk until I got to my floor. I didn’t see him again for a few weeks when he was introduced to the campus as the new Director.

I had always tried to blend in with the dog at work. I was the “trial case” and I really didn’t want to cause waves or draw any more attention to myself than walking around a government building with a dog. One day while we were getting lunch in the cafeteria, someone stops me as Tango and I are walking out. It was the Director, sitting at a table with other executives. He stopped his working lunch to pet the dog and then let us go on our way. So much for blending in.

Tango’s service dog career and the Director’s appointment ended at roughly the same time. Before they both left, however, we had many surprise visits when the Director just dropped into my office (thank goodness those were the days before social media took off, so I was almost always doing legitimate work!). There was one December when he invited us up to his office for a holiday party — with his dog! That was certainly a December I’ll always remember.

Tango was disqualified from service work about halfway through his training due to an elbow abnormality that would likely shorten his working career. I was elated to get the news.

For the next fourteen years or so, Tango was by my side in both adventure, education, and business.

He was my “KPA dog”—the dog who was a partner in my dog trainer education.  It was an intense 6-month program in which we both had to do our part in order to graduate.

The transition from service dog to pet dog was tough for Tango. He delighted in going places with me and had a really hard time understanding why I left him behind when I went out. To give him a taste of his former life that he loved so much, Tango and I were certified as a therapy dog team.

We spent time in nursing homes, hospice facilities, and, Tango’s favorite, elementary schools. By far, his favorite place to go was the local elementary school (where, coincidentally, I went to school 31 years before Tango was born.

We spent many years at my old elementary school with kids who had developmental disabilities. He loved those kids so much and really delighted in our weekly trips. They read to him and he hung on every single word.

For about ten years, we were sure the radiographs that got him dismissed from service work had been incorrect. He was fit, he’d swim all day, retrieve until he was exhausted. He was an athlete!

The medication started, too. Initially just one pill and only when needed. But before it was all over, there were so many drugs, so many times a day. There were joint injections, acupuncture, massage, and laser. We did everything we could for as long as we could.

One of his favorite things was going to the garden with me and picking ripe tomatoes from the vine. I knew he’d have trouble getting to the garden last year, so I planted three tomatoes in the yard for him. Even when his arthritis was at it’s worst, he wanted to go out and pick some tomatoes.

I made a little toast to Tango as I ate that first tomato this year.

I won’t recount every single thing we did together, there are too many. And it’s not really what we did that was special, it’s that we did it together.

We were a team. He was mine and I was his. My favorite dog, no matter which dog we had in training, Tango always got the best sleeping spot, the best leftovers, the best toy. I was my best when I was with him.

I know I’ll love other dogs. Of course I will. They’re dogs after all. But there won’t be another like this one.

Should you get littermates? I don't usually get this question. Normally, I hear "Help, we got littermates!" That comes after the littermates are already home and the people are feeling understandably … END_OF_DOCUMENT_TOKEN_TO_BE_REPLACED

Gracie participated in two classes. Laurie is very knowledgable about dog training, very patient with owners and clearly loves her work. I especially remember the lesson about the settle mat. Laurie kept telling me to “wait, wait, she will figure i… END_OF_DOCUMENT_TOKEN_TO_BE_REPLACED

When Laurie took over the training of my 9-month old puppy, he had already been through 2 rounds of puppy school. Obviously, they had been failures. Laurie showed us how to get him under control using positive reinforcement as his main reward. He now… END_OF_DOCUMENT_TOKEN_TO_BE_REPLACED

Working in the veterinary field has shown me how important positive reinforcement training for dogs is. When it came time to train my own dog, Quincy, Smart Dog University was my choice for training. Laurie is a calm force and true dog lover! Two yea… END_OF_DOCUMENT_TOKEN_TO_BE_REPLACED

Our family used Laurie Luck and Smart Dog University for training both of our very active labs. Laurie was amazing at helping our entire family learn to train and work with the dogs. The most helpful thing for us about both the group classes and in-h… END_OF_DOCUMENT_TOKEN_TO_BE_REPLACED

The knowledge SDU provided is invaluable. Laurie’s willingness to share her calm logic and vast knowledge and patience about how to raise a happy dog (and happy dog people) has created harmony we did not have before. A big thanks to my sister who… END_OF_DOCUMENT_TOKEN_TO_BE_REPLACED

Laurie is someone Your Dog’s Friend depends on for good information on dog behavior and training presented in an engaging, understandable way. She has done free workshops for us; we have used her articles in our newsletter; and she is a trainer who… END_OF_DOCUMENT_TOKEN_TO_BE_REPLACED