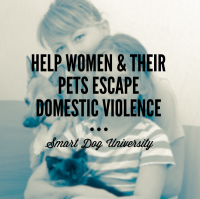 So here’s a scary statistic: Almost half of abused women say they aren’t able to escape their abusive lives because they worry about what will happen to their pets if they leave.

Abusers often use pets as pawns, which means many survivors tend to hang around solely because of concern for their pets. There aren’t enough domestic violence shelters nationwide that accept pets. This means that frequently, survivors are forced to choose between a life without their pet, or a dangerous living situation.

There is a domestic violence center in Kansas City, MO, that’s way ahead of it’s time: the Rose Brooks Center.

The idea for this incredible project was born, when a woman called our hotline after her boyfriend had beaten her – almost to death – with a hammer. Immediately we found space for this young woman and arranged for the police to bring her to a shelter. There was one problem. She had a 110-pound Great Dane whom she refused to leave behind. The dog had saved her life by lying on top of her during the attack and taking the majority of the blows. As a result, he sustained many broken bones, including a hip and two ribs. She refused to abandon her dog.

In 2012, with help from Bayer, Rose Brooks Center became the first domestic violence shelter in the region to welcome four-legged family members, and –no surprise here — the therapeutic benefits pets have on abuse survivors became abundantly clear. Bayer’s donation of $50,000 helped to fund the creation of Paws Place, a pet shelter co-located on Rose Brooks’ facility, providing a safe place for survivors of domestic abuse to spend time with their pets and heal together. Since its creation, Bayer has supported Rose Brooks Center every year by providing funding for pet care costs and facility maintenance.

“We cherish the relationship we have with Bayer Animal Health, and cannot thank them enough for their support over the years,” said Zoe Agnew Svboda, Paws Place Program Coordinator. “Paws Place is changing the lives of the individuals walking through our doors every day, and we are thankful that we’re able to provide the care they need to heal and move forward.”

I can’t imagine choosing to leave my dog behind, especially in an abusive situation.

Here’s what one survivor said about her decision to come to Paws Place for refuge. “My dog is a big part of my family, and is my emotional support system. It’s hard to put into words, but animals heal [you]—more than sitting in a chair for therapy. If it weren’t for Paws Place, I wouldn’t have come to the shelter and I would have lost my kids. My dog would have stayed chained up with my abuser. Animals are protectors, and my dog stepped in to protect me from my abuser several times.” Yeah. I totally get how important a dog can be. To every dog owner, but particularly a dog who’s stood by you with emotional support no matter what.

In a perfect world every domestic violence shelter would accept pets. That’s not the case, sadly. Mostly because of funding.

In 2013, the URI People and Animals Living Safely (URIPALS) program was launched on-site at URI’s Urban Women’s Safe Haven and Urban Women’s Retreat shelters. URIPALS is the first co-sheltering program in New York City, and one of few offered nationwide, that is equipped to house families and pets together, preserving their welfare and safety.

Big steps are being taken at the national level to address this issue. And YOU can help.

The Pet and Women Safety (PAWS) Act is currently in review and aims to help bridge the gap between the need of services for domestic violence survivors with pets and the ability of agencies to meet those needs. This bill is adamant about removing the roadblock that is essential to the safety of these survivors, acknowledging that more services are urgently needed to accomplish this.

“We recognize the great need to support domestic violence shelters that care for both survivors and their beloved pets,” said Lauren Dorsch, Senior Manager of Communications, Bayer Animal Health. “Survivors of domestic violence should not have to choose between their safety and a loved one, and these shelters make it possible for them to heal in a safe place, without saying goodbye to their pets.”

There are several ways you can support the PAWS Act and raise awareness for this important cause. Pick one, pick three — anything you do will help.

As involved with dogs as I am, I’d not thought about the clear need for survivors to have a safe place they can go with their pet. This is important stuff and with the help of Bayer (for the funding) and YOU for writing to you government representatives, we can really make a difference here!

About Bayer: Science For A Better Life

Bayer is a global enterprise with core competencies in the Life Science fields of health care and agriculture. Its products and services are designed to benefit people and improve their quality of life. At the same time, the Group aims to create value through innovation, growth and high earning power. Bayer is committed to the principles of sustainable development and to its social and ethical responsibilities as a corporate citizen. In fiscal 2015, the Group employed around 117,000 people and had sales of EUR 46.3 billion. Capital expenditures amounted to EUR 2.6 billion, R&D expenses to EUR 4.3 billion. These figures include those for the high-tech polymers business, which was floated on the stock market as an independent company named Covestro on Oct. 6, 2015. For more information, go to www.bayer.com.

Should you get littermates? I don't usually get this question. Normally, I hear "Help, we got littermates!" That comes after the littermates are already home and the people are feeling understandably … END_OF_DOCUMENT_TOKEN_TO_BE_REPLACED

Working in the veterinary field has shown me how important positive reinforcement training for dogs is. When it came time to train my own dog, Quincy, Smart Dog University was my choice for training. Laurie is a calm force and true dog lover! Two yea… END_OF_DOCUMENT_TOKEN_TO_BE_REPLACED

Our family used Laurie Luck and Smart Dog University for training both of our very active labs. Laurie was amazing at helping our entire family learn to train and work with the dogs. The most helpful thing for us about both the group classes and in-h… END_OF_DOCUMENT_TOKEN_TO_BE_REPLACED

When Laurie took over the training of my 9-month old puppy, he had already been through 2 rounds of puppy school. Obviously, they had been failures. Laurie showed us how to get him under control using positive reinforcement as his main reward. He now… END_OF_DOCUMENT_TOKEN_TO_BE_REPLACED

Laurie’s group class was perfect for my distractible social butterfly pup (aptly named Zippy)! Her positive training methods make learning as much fun for the humans as for the dogs. Training is a lifelong (daily) bonding adventure, with Laurie’s… END_OF_DOCUMENT_TOKEN_TO_BE_REPLACED

The knowledge SDU provided is invaluable. Laurie’s willingness to share her calm logic and vast knowledge and patience about how to raise a happy dog (and happy dog people) has created harmony we did not have before. A big thanks to my sister who… END_OF_DOCUMENT_TOKEN_TO_BE_REPLACED

Gracie participated in two classes. Laurie is very knowledgable about dog training, very patient with owners and clearly loves her work. I especially remember the lesson about the settle mat. Laurie kept telling me to “wait, wait, she will figure i… END_OF_DOCUMENT_TOKEN_TO_BE_REPLACED