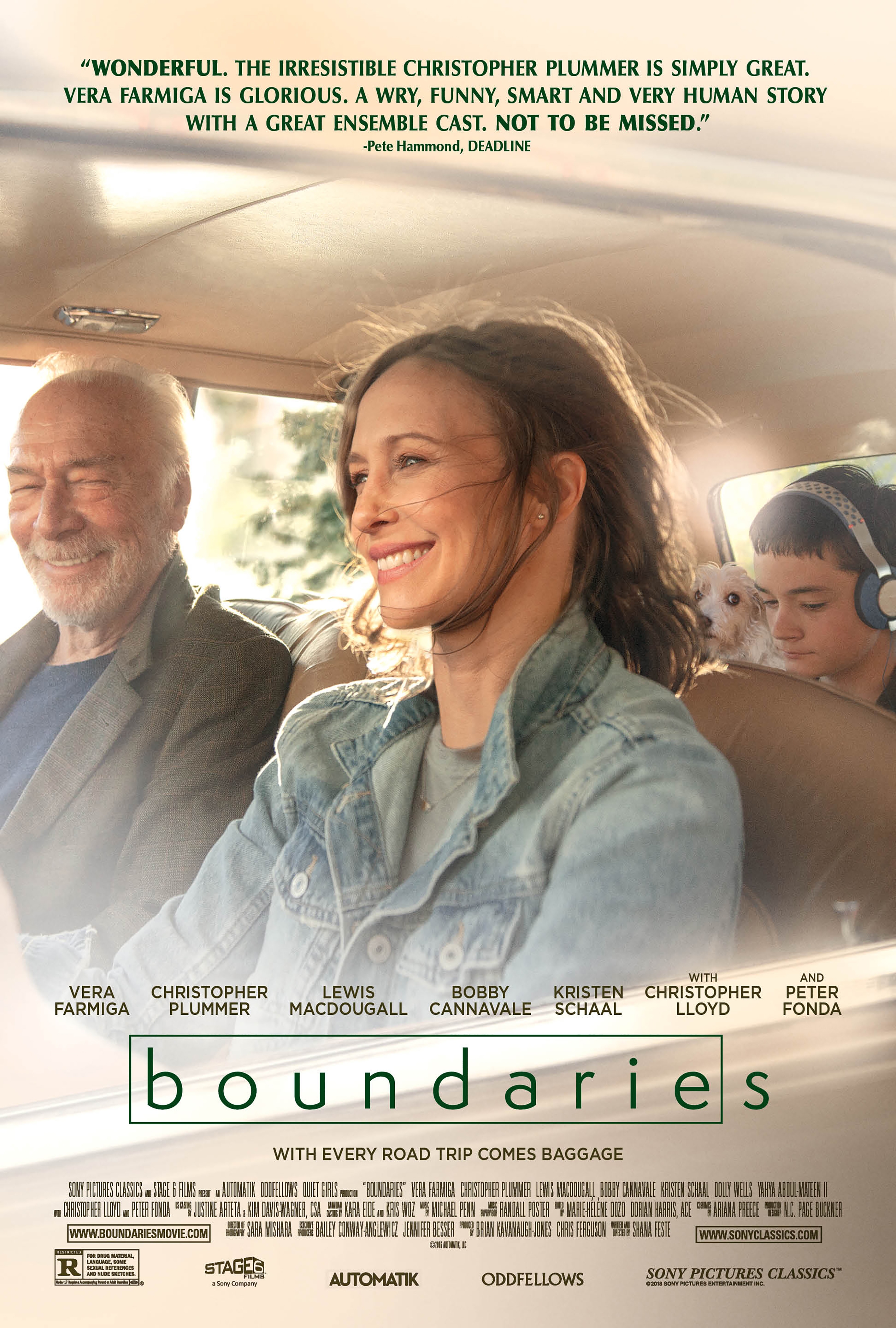 I’m often asked to review dog-related products, treats, and food, but earlier this month, I was asked to do a movie review for a Sony Pictures movie called Boundaries.

I was intrigued. Me, do a movie review? Why on earth would Sony Pictures ask me to screen a movie?

Curiosity got the better of me and instead of automatically deleting the email, I opened it.

It became immediately clear why: DOGS. Dogs (and a few cats — one naked kitty, even) show up in the movie all over the place.

Here’s a quick breakdown of the important info about Boundaries:

Laura (Vera Farmiga) is a single mother living in Seattle, who has a constant need to put others & animals before her. When her estranged, criminally-minded father Jack (Christopher Plummer) is kicked out of his retirement home, Laura agrees to drive him down the coast to live with her sister JoJo (Kristen Schaal) in LA. Along for the ride is her bright but troubled son Henry, and an assortment of animal charity cases. Without telling Laura, Jack convinces Henry to help him sell off his copious supply of marijuana at every stop of their journey, resulting in unexpected reunions with old friends and family.

The movie is well-written, has an interesting plot (and some hilarious sub-plots) and uses the dogs (and kitties) in a way that they’re important to the movie, but aren’t the center of the plot.

It’s the backstory, and behind-the-scenes details, though, that I almost always find the most interesting.

The writer, Shana Feste, wrote this movie about her own real-life relationship with her father. Christopher Plummer, the actor who plays Jack, the father, says this about the writer: “She’s written it in a most unique style, but behind the brittle wordplay, there’s another life going on, a much deeper and more profound, unspoken life, a relentless search for harmony that must finally penetrate the surface. Shana is able to produce laughter and tears with equal and stunning force, and her actors are mighty blessed with the rich and eccentric characters she’s given them to play.”

Another interesting aspect of Boundaries was the casting.

Once the funding was confirmed and the wheels of production began to turn, Feste and team set about casting. The tone of the script called for actors who could thrive in dramatic situations, but who could also deliver the comic moments that would ultimately define the film. All the actors in the film were Feste’s first choice.

She spoke of casting Vera Farmiga as Laura: “Our first instinct was to cast a big comedy actress for this role; then I thought, if we do cast a comedic actress, those dramatic moments that are so important might be a bit lost. I hope that drama will set this film apart from being just a charming little comedy that you see and forget about the next day. I knew I needed those real moments of truth, and I knew Vera could deliver on those and the comic flavor as well.”

She continues: “It could have been a strange feeling directing Vera as, in many ways, my own alter-ego, but she made the character so much her own; Vera has so much depth and subtlety as an actor. We could really collaborate on bringing Laura to life.”

The actor cast as Laura’s son sort of steals the screen in Boundaries.

Instinct helped Feste cast the role of Henry, Laura’s 12-year-old son who is an intriguing and endearing mix of innocence, smarts, bruised feelings, and deadpan wisdom beyond his years. “I really didn’t want that very self-aware “kid actor” style,” says Feste of her search for Henry.

“When we saw Lewis MacDougall, I knew he was the one—even though he was more complicated to work with because he’s Scottish. He had to nail the American accent, and we had to deal with visas and such, but he had to be Henry. He’s so natural and subtle. His face draws you in. He has that kind of magic quality where he sticks to the screen.”

Not surprisingly, the quiet stars of Boundaries are the canines.

Just as they included bios of each human actor, Sony Pictures sent a bio for each animal actor with the Boundaries press package, as well. I didn’t include them all here, but I found that element so endearing (that they wrote bios for each animal in the film), that I felt it important to include a few.

Loretta is a terrier rescue and loves napping, stealing food from babies and being held. Loretta was the happiest dog on set because she was finally allowed to go to work with her mom, who directed the movie. The only problem was when her mom would yell, “Action!” Loretta would immediately run to her behind the camera so the first AD had to call action in the scenes Loretta stars in. Loretta made every dog jealous when she got to kiss Christopher Plummer on the lips – she nailed it every time.

Squirt plays the part of “rescue puppy” along with littermates that looked similar. The pups were sixteen-week-old chihuahua mixes and got a ton of attention behind the scenes. So much so that the animal wrangler had to act as security when too many crew members swarmed around them – but they were happy to have all the love!

I had a great time screening this movie. Because I’m so entrenched in the dog world, most of the time it’s hard for me to watch movies with dogs because I can read body language and most of the time it’s easy for me to see dogs who are uncomfortable in that filming situation. The dogs in Boundaries were not only comfortable, but most often seemed to be having a really good time with the actors in the movie.

There was a premiere in New York City on June 11 and all the actors, along with the crew were there — with dogs! In addition, there were other celebrities known for their work with rescued animals were there, as well.

The Boundaries movie was released on June 22 in Los Angeles and New York and will be in theatres after that. If you see the movie, let me know what you think in the comments!

Should you get littermates? I don't usually get this question. Normally, I hear "Help, we got littermates!" That comes after the littermates are already home and the people are feeling understandably … END_OF_DOCUMENT_TOKEN_TO_BE_REPLACED

When Laurie took over the training of my 9-month old puppy, he had already been through 2 rounds of puppy school. Obviously, they had been failures. Laurie showed us how to get him under control using positive reinforcement as his main reward. He now… END_OF_DOCUMENT_TOKEN_TO_BE_REPLACED

The knowledge SDU provided is invaluable. Laurie’s willingness to share her calm logic and vast knowledge and patience about how to raise a happy dog (and happy dog people) has created harmony we did not have before. A big thanks to my sister who… END_OF_DOCUMENT_TOKEN_TO_BE_REPLACED

Our family used Laurie Luck and Smart Dog University for training both of our very active labs. Laurie was amazing at helping our entire family learn to train and work with the dogs. The most helpful thing for us about both the group classes and in-h… END_OF_DOCUMENT_TOKEN_TO_BE_REPLACED

Laurie’s group class was perfect for my distractible social butterfly pup (aptly named Zippy)! Her positive training methods make learning as much fun for the humans as for the dogs. Training is a lifelong (daily) bonding adventure, with Laurie’s… END_OF_DOCUMENT_TOKEN_TO_BE_REPLACED

Working in the veterinary field has shown me how important positive reinforcement training for dogs is. When it came time to train my own dog, Quincy, Smart Dog University was my choice for training. Laurie is a calm force and true dog lover! Two yea… END_OF_DOCUMENT_TOKEN_TO_BE_REPLACED

Laurie is someone Your Dog’s Friend depends on for good information on dog behavior and training presented in an engaging, understandable way. She has done free workshops for us; we have used her articles in our newsletter; and she is a trainer who… END_OF_DOCUMENT_TOKEN_TO_BE_REPLACED

Gracie participated in two classes. Laurie is very knowledgable about dog training, very patient with owners and clearly loves her work. I especially remember the lesson about the settle mat. Laurie kept telling me to “wait, wait, she will figure i… END_OF_DOCUMENT_TOKEN_TO_BE_REPLACED