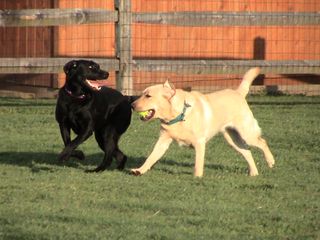 If you live with more than one dog, do the same rules apply to both?

I suppose in most homes, the dogs have the same rules. But in our house, different dogs have different rules.

Ike, the service pup in training, has the most rules to follow. His life is relatively structured, as he's going to have an important job – helping a disabled veteran lead a full life.

The other three dogs in the house have pretty relaxed rules. They're pet dogs, they don't have the same expectations placed on them as Ike.

That must be confusing, right? Ike's rules are different — more strict even — than the rest of the dogs in the house.

Not really. Ike's rules have been in place since the day he crossed the threshold. And they've never varied. They're the same every day, no matter what.

What rules are different for Ike? It would probably be easier to list what isn't different!

You get the picture: Ike's day-to-day life is different than his housemates. But this doesn't cause him any confusion. His rules never vary, they're the same every single day.

So don't be afraid to have different rules for different dogs — but only if you're consistent enough to remember the rules and apply them to the appropriate dog(s)!

P.S. Don't think that because Ike lives with a lot of rules, he's miserable. This guy loves his rules! (As I think most dogs do, if those rules are consistent.) His life is still pretty good: He still gets to rip it up in the backyard with his housemates. He still gets lots of love and attention from us humans. He gets just as many goodies (if not more) as his doggie housemates. Heck, he gets to go out in public with me on my errands!

Should you get littermates? I don't usually get this question. Normally, I hear "Help, we got littermates!" That comes after the littermates are already home and the people are feeling understandably … END_OF_DOCUMENT_TOKEN_TO_BE_REPLACED

Gracie participated in two classes. Laurie is very knowledgable about dog training, very patient with owners and clearly loves her work. I especially remember the lesson about the settle mat. Laurie kept telling me to “wait, wait, she will figure i… END_OF_DOCUMENT_TOKEN_TO_BE_REPLACED

Laurie’s group class was perfect for my distractible social butterfly pup (aptly named Zippy)! Her positive training methods make learning as much fun for the humans as for the dogs. Training is a lifelong (daily) bonding adventure, with Laurie’s… END_OF_DOCUMENT_TOKEN_TO_BE_REPLACED

Working in the veterinary field has shown me how important positive reinforcement training for dogs is. When it came time to train my own dog, Quincy, Smart Dog University was my choice for training. Laurie is a calm force and true dog lover! Two yea… END_OF_DOCUMENT_TOKEN_TO_BE_REPLACED

When Laurie took over the training of my 9-month old puppy, he had already been through 2 rounds of puppy school. Obviously, they had been failures. Laurie showed us how to get him under control using positive reinforcement as his main reward. He now… END_OF_DOCUMENT_TOKEN_TO_BE_REPLACED

Our family used Laurie Luck and Smart Dog University for training both of our very active labs. Laurie was amazing at helping our entire family learn to train and work with the dogs. The most helpful thing for us about both the group classes and in-h… END_OF_DOCUMENT_TOKEN_TO_BE_REPLACED

The knowledge SDU provided is invaluable. Laurie’s willingness to share her calm logic and vast knowledge and patience about how to raise a happy dog (and happy dog people) has created harmony we did not have before. A big thanks to my sister who… END_OF_DOCUMENT_TOKEN_TO_BE_REPLACED

Laurie is someone Your Dog’s Friend depends on for good information on dog behavior and training presented in an engaging, understandable way. She has done free workshops for us; we have used her articles in our newsletter; and she is a trainer who… END_OF_DOCUMENT_TOKEN_TO_BE_REPLACED