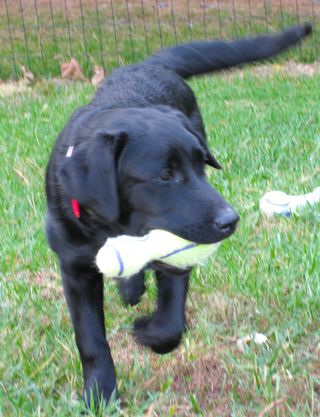 Part of becoming a service dog involves getting used to a lot of different sights and sounds. Ike had a field trip today to our local commuter train station.

It's highly likely that in his lifetime as a service dog, Ike and his partner will need to take public transportation. It's crucial to make these experiences fun for Ike.

To that end, I brought lots of yummy treats. Not just any treats, though. I brought the really yummy and smelly stuff: feta cheese and tiny pieces of grilled pork chop (leftover from dinner a few nights ago).

Ike doesn't normally get this really delicious stuff in his everyday training. Going to WalMart isn't a big deal to him now. Going with me while I get my hair cut is old hat. The treats I use for those locations are more mundane (but still pretty tasty) because he's used to those situations.

But a train station? That's big. And potentially scary.

The grilled pork and feta cheese helped Ike create favorable associations with the potentially scary train. The noise of the station, lurching left and right on the train ride, the hustle and bustle of people, and the screeching and banging that a fast-moving train makes – any one of those could have thrown Ike into a tail spin.

The feta and grilled pork helped ensure that his train ride was a fabulous experience.

In addition to the really good food, I was careful to lower my standards for Ike. He was in a strange place. With lots of odd sounds. And almost every person there was a stranger to him. So instead of asking him for newly trained behaviors, I asked him for the very easy ones – the behaviors he's been doing since he was a pup. And he got paid BIG for each of those behaviors!

This allowed Ikey to build up his confidence, to realize he really could lie down even on the rocking and rolling train. He really could sit as the train came into the station.

If you're raising a puppy, remember to use very good food treats when you're taking your pup somewhere new. Also remember to lower your standards if you're training somewhere distracting or potentially scary. Let your dog take his time exploring and deciding when he feels comfortable. The more positive experiences your pup has, the more likely he'll become a confident, well-mannered dog.

There's a lot more training ahead for Ike. But his first introduction to the trains and buses earned an A+ today! Next time we go back, we'll likely raise his criteria slightly — maybe I'll ask him to sit for a little longer. Or expect him to watch me a little more. And maybe he'll get the feta and grilled pork every second or third treat. But by really upping the treat value this first time, I've created a positive association with trains and with training. And that's priceless.

Should you get littermates? I don't usually get this question. Normally, I hear "Help, we got littermates!" That comes after the littermates are already home and the people are feeling understandably … END_OF_DOCUMENT_TOKEN_TO_BE_REPLACED

Laurie is someone Your Dog’s Friend depends on for good information on dog behavior and training presented in an engaging, understandable way. She has done free workshops for us; we have used her articles in our newsletter; and she is a trainer who… END_OF_DOCUMENT_TOKEN_TO_BE_REPLACED

When Laurie took over the training of my 9-month old puppy, he had already been through 2 rounds of puppy school. Obviously, they had been failures. Laurie showed us how to get him under control using positive reinforcement as his main reward. He now… END_OF_DOCUMENT_TOKEN_TO_BE_REPLACED

Working in the veterinary field has shown me how important positive reinforcement training for dogs is. When it came time to train my own dog, Quincy, Smart Dog University was my choice for training. Laurie is a calm force and true dog lover! Two yea… END_OF_DOCUMENT_TOKEN_TO_BE_REPLACED

Gracie participated in two classes. Laurie is very knowledgable about dog training, very patient with owners and clearly loves her work. I especially remember the lesson about the settle mat. Laurie kept telling me to “wait, wait, she will figure i… END_OF_DOCUMENT_TOKEN_TO_BE_REPLACED

Our family used Laurie Luck and Smart Dog University for training both of our very active labs. Laurie was amazing at helping our entire family learn to train and work with the dogs. The most helpful thing for us about both the group classes and in-h… END_OF_DOCUMENT_TOKEN_TO_BE_REPLACED

Laurie’s group class was perfect for my distractible social butterfly pup (aptly named Zippy)! Her positive training methods make learning as much fun for the humans as for the dogs. Training is a lifelong (daily) bonding adventure, with Laurie’s… END_OF_DOCUMENT_TOKEN_TO_BE_REPLACED