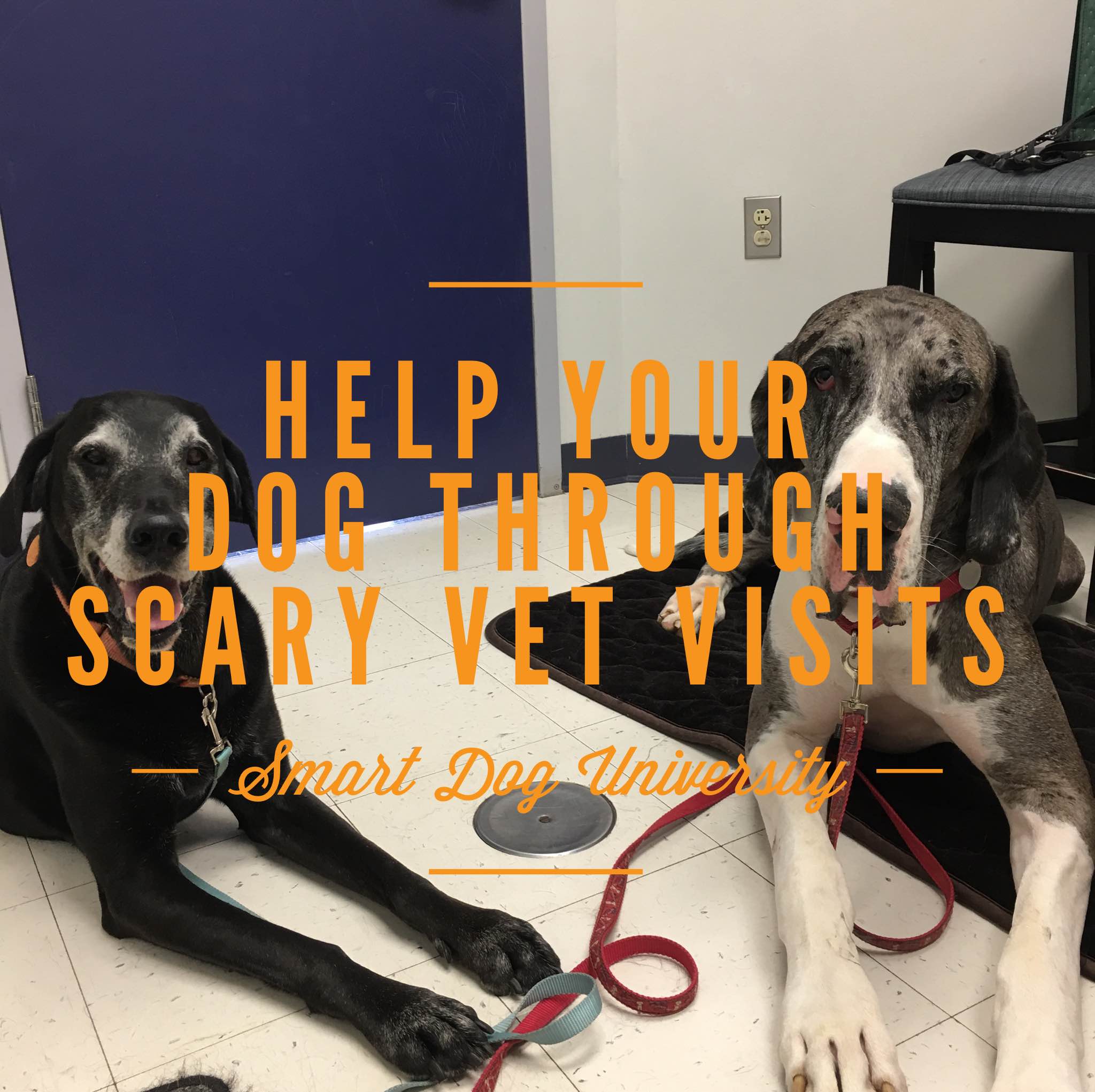 Does your dog think veterinary visits are scary?

If you wish you could make those necessary visits a little easier on your dog, you’re in the right place. Schooner the Great Dane is 165 pounds of muscle. He’s a big boy and — even if I could — I’m not going to make this guy do anything he doesn’t want to do. When we got Schooner back from the service dog agency, I noticed that he was a dog who thought veterinary visits were scary. And we’ve got the best veterinarians — people who know exactly how to accomplish fear-free veterinary visits. They did everything right, but Schoons is a sensitive soul despite his imposing presence.

I was worried that if I didn’t address this budding anxiety and fear, it might ramp up at each subsequent visit. Ramping up how? Well, a lot of scared dogs try avoidance first. That looks like hesitating to go into the veterinary hospital or into the exam room. It can include hiding behind furniture or you, or even sitting in the corner facing away from you. If that’s not successful (meaning: if the technician and/or veterinarian come closer), the dog might escalate his reaction. This could lead to lip lifting, snarling, snapping, or even biting.

Neither my veterinarian or the technicians (or me! or Schoons!) want a bite to happen. No way, no how. So to that end, I took some of my own (sage, if I do say so myself) advice.

Vet Hospital = Fun
First, we need to make the veterinary hospital itself a fun and cool place to be for the dog. How do you do that? You pack some crazy-delicious treats (chicken, cheese, steak — you get the idea) and you hang out with your dog at the veterinary hospital. I took Schooner’s settle mat, tons of amazing treats, and the clicker.

Our first visit was rocky: Schooner didn’t want to eat any treats for at least the first five minutes. His tail was tucked, he was panting, and restless. He just wanted to leave. I sweet talked him, read a magazine (pretended to, at least) and every so often would offer him a tasty treat. When he began to take treats regularly, I got the clicker out and asked for some easy hand touches.

Our progress began to snowball once I got some training started — I think it’s a combination of (1) taking his mind off of the anxiety, (2) getting his parasympathetic nervous system revved up, and (3) giving him something he knows he can do (and likes to do).

We kept those visits short and light. I didn’t ask him to greet any of the veterinary hospital staff, he didn’t have to get on the scale, or go into an exam room. My only goal was that I get him in the door and get him to relax. Mission accomplished!

Better Living Through Chemistry
To further accelerate Schooner’s progress, we introduced an “event medication,” to help alleviate some of his fear and anxiety. I would dose Schooner with the medication a couple of hours before our visit, he’d mellow out, and our training sessions became even more valuable because we could make more progress at each visit. I added some other adjunctive therapies, too, like Adaptil and Through A Dog’s Ear, to help further prime Schooner for good learning experiences. There are many more medication options available today than were available even a few years ago. And they work better, too. Instead of sedating a dog, the newer anti-anxiety medications actually work on the fear itself instead of putting your dog in a loopy, “out of it” state.

Training Plan
In addition to the weekly fun veterinary hospital visits, I implemented a training plan at home, where Schooner was already super comfortable. It looked to me like Schooner was most nervous when two people approached him, especially if either of those people was holding something that might be used on him. (When my husband and I were giving Tango his weekly Adequan injection [I feed Tango peanut butter while my husband injects the Adequan], I noticed that Schooner made a beeline out of the room — and stayed gone for several minutes.) He would even run from just me occasionally, if I was holding something “suspicious” like cotton balls. [Because cotton balls can be dangerous, of course — everyone knows they are an instrument of terror. Where does he come up with these strange thoughts?!]

So, with some help from a colleague, Laura Monaco Torelli, I implemented a training plan to systematically address Schooner’s sources of anxiety and fear. Here’s what I did:

Veterinary Hospital Take Two
In the meantime, I’d been practicing our fun veterinary visits about once a week when my schedule allowed (it’s an hour’s drive, round trip). We moved from “hang out and have fun” to getting a little bit of work done in the veterinary hospital. That meant that when Schooner was comfortable in the waiting room, I then started venturing into the exam room leaving the door open to the waiting room. As expected, this slight change and foray into the dreaded exam room meant we took a little step backward in Schooner’s comfort level. No worries, that kind of backslide was expected and wasn’t worrisome. I simply went back to just feeding him, not asking him to do anything to earn those treats. He hopped over that little speed bump really quickly (also expected) and I then moved to the next step: asking him to do easy stuff in the open exam room. “Piece of cake,” said Schoons! Here are the next steps we went through at the veterinary hospital:

Next up, the results of our practice and training are in!

I’ll let you know how the practice veterinary exam went, what worked, what didn’t! Stay tuned for Part 2!

Should you get littermates? I don't usually get this question. Normally, I hear "Help, we got littermates!" That comes after the littermates are already home and the people are feeling understandably … END_OF_DOCUMENT_TOKEN_TO_BE_REPLACED

When Laurie took over the training of my 9-month old puppy, he had already been through 2 rounds of puppy school. Obviously, they had been failures. Laurie showed us how to get him under control using positive reinforcement as his main reward. He now… END_OF_DOCUMENT_TOKEN_TO_BE_REPLACED

Laurie’s group class was perfect for my distractible social butterfly pup (aptly named Zippy)! Her positive training methods make learning as much fun for the humans as for the dogs. Training is a lifelong (daily) bonding adventure, with Laurie’s… END_OF_DOCUMENT_TOKEN_TO_BE_REPLACED

Working in the veterinary field has shown me how important positive reinforcement training for dogs is. When it came time to train my own dog, Quincy, Smart Dog University was my choice for training. Laurie is a calm force and true dog lover! Two yea… END_OF_DOCUMENT_TOKEN_TO_BE_REPLACED

Our family used Laurie Luck and Smart Dog University for training both of our very active labs. Laurie was amazing at helping our entire family learn to train and work with the dogs. The most helpful thing for us about both the group classes and in-h… END_OF_DOCUMENT_TOKEN_TO_BE_REPLACED

The knowledge SDU provided is invaluable. Laurie’s willingness to share her calm logic and vast knowledge and patience about how to raise a happy dog (and happy dog people) has created harmony we did not have before. A big thanks to my sister who… END_OF_DOCUMENT_TOKEN_TO_BE_REPLACED

Gracie participated in two classes. Laurie is very knowledgable about dog training, very patient with owners and clearly loves her work. I especially remember the lesson about the settle mat. Laurie kept telling me to “wait, wait, she will figure i… END_OF_DOCUMENT_TOKEN_TO_BE_REPLACED

Laurie is someone Your Dog’s Friend depends on for good information on dog behavior and training presented in an engaging, understandable way. She has done free workshops for us; we have used her articles in our newsletter; and she is a trainer who… END_OF_DOCUMENT_TOKEN_TO_BE_REPLACED