I’m at K9 Nose Work Camp in Cleveland, GA. It’s in the foothills of the mountains, a beautiful place, really. But along with the beauty comes wildlife. I’m not a city-girl (not that there’s anything wrong with that), so I’m used to critters. Heck, I pick up bumblebees, save spiders, and move toads out of the dogs’ reach. I’m pro-wildlife.

Just as I’d moved everything into my cabin, this big old snake comes slithering by. 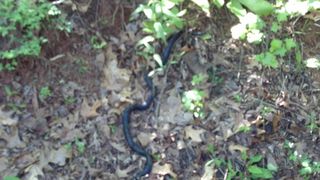 I’m ok with snakes and other slithering creatures as long as they stay outside, especially if I’m inside.

After my snake encounter, I found myself jumping at slightest noise in the leaves. I investigated every room I entered, checking for a snake or lizard or salamander.

I now have a small idea of what reactive dogs go through. I know my reactivity isn’t logical. I know snakes don’t want to get close to me. However: I’m now hyper-vigilant whenever I hear something move in the leaves. I jump at the slightest movement or sound. It could be a bird hopping among the leaves, it doesn’t matter. I’m getting the heck away from there — and quick!

This morning, on my way to breakfast, yet again, something moved in the leaves. It’s been two days since my snake run-in (with no other snake spottings), but I yelped and jumped. Run first, investigate later.

My heart was racing and I felt almost angry. When further inspection revealed the creature that made the noise — a toad, for goodness sake! — I was rattled. A toad? I pick these things up all the time. I am definitely not afraid of a toad. But that one experience — and it wasn’t a terrible one, nothing awful happened to me (except I was scared) — has now molded my entire camp experience. If I had to live the rest of my life like this, I would be a very unhappy person. Thankfully, I know this reactivity will naturally fade.

If I were a dog, I think I would probably have bitten the closest thing to me. Just out of frustration, adrenaline, and anxiety. And if my owner hired a trainer who would correct me for my reaction to the noises in the leaves, I know I would bite! My reaction is reflexive – I’m not thinking before I yelp and jump. And lastly, being reactive is exhausting; it’s frustrating!

Should you get littermates? I don't usually get this question. Normally, I hear "Help, we got littermates!" That comes after the littermates are already home and the people are feeling understandably … END_OF_DOCUMENT_TOKEN_TO_BE_REPLACED

Working in the veterinary field has shown me how important positive reinforcement training for dogs is. When it came time to train my own dog, Quincy, Smart Dog University was my choice for training. Laurie is a calm force and true dog lover! Two yea… END_OF_DOCUMENT_TOKEN_TO_BE_REPLACED

Our family used Laurie Luck and Smart Dog University for training both of our very active labs. Laurie was amazing at helping our entire family learn to train and work with the dogs. The most helpful thing for us about both the group classes and in-h… END_OF_DOCUMENT_TOKEN_TO_BE_REPLACED

When Laurie took over the training of my 9-month old puppy, he had already been through 2 rounds of puppy school. Obviously, they had been failures. Laurie showed us how to get him under control using positive reinforcement as his main reward. He now… END_OF_DOCUMENT_TOKEN_TO_BE_REPLACED

Laurie’s group class was perfect for my distractible social butterfly pup (aptly named Zippy)! Her positive training methods make learning as much fun for the humans as for the dogs. Training is a lifelong (daily) bonding adventure, with Laurie’s… END_OF_DOCUMENT_TOKEN_TO_BE_REPLACED

The knowledge SDU provided is invaluable. Laurie’s willingness to share her calm logic and vast knowledge and patience about how to raise a happy dog (and happy dog people) has created harmony we did not have before. A big thanks to my sister who… END_OF_DOCUMENT_TOKEN_TO_BE_REPLACED

Gracie participated in two classes. Laurie is very knowledgable about dog training, very patient with owners and clearly loves her work. I especially remember the lesson about the settle mat. Laurie kept telling me to “wait, wait, she will figure i… END_OF_DOCUMENT_TOKEN_TO_BE_REPLACED