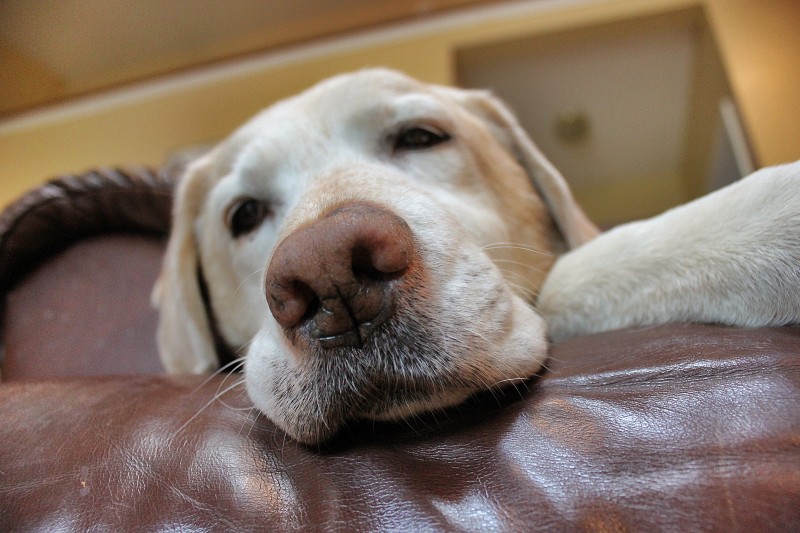 Money and old dogs go together.

We’ve got three old dogs and (one youngster who is so big it’s like having two dogs). They’re starting to have little aches and pains, a new lump every month it seems, and a series of continual little things that occasionally blossom into bigger things.

Tango’s been the star of the old dogs party lately. A bit ago, he started vomiting every time he ate. He’s always had a touchy stomach — he got sick if he had milk or raw meat, for instance. But still, this was sudden and consistent. We thought maybe he’d eaten something that had gotten sideways and was causing the trouble. However, Tango’s blood chemistry showed some anemia — hmm, that’s odd. That strange result led to more tests. (Ahem. And more money.) I’m not complaining about the money. I’d pay a gazillion dollars to make this guy happy and healthy.

They shaved his belly and looked at his insides with an ultrasound. BINGO: ulcer, and a big one at that. Ouchie! We also did chest x-rays to look for other…stuff. (Stuff = bad things like the c-word. Fingers crossed, nothing showed up.)

After a few more vomits, a few panicked calls, and some new meds and new food, we’ve gotten a handle on the vomiting…for now. I feel like I have to qualify it (for good juju), but it makes me feel better – a little, at least.

I’ve been analyzing every breath and fart from that dog since this whole ordeal started. I’m an only child; I feel a keen responsibility to take care of everyone and everything. Any other only’s out there? Did you ever worry that you’d hurt your mom’s feelings if you said you wanted to go to the hardware store with your dad? I was a worrier from a young age. Things haven’t changed much. I even sort of kept a running tally of which parent I spent time with last, so I was sure to give the other parent equal time. Weird? Yeah, I know.

Our daily routine used to be fairly easy and flexible. I’d do some training with each dog in the morning, then give them a Kong around 2p every afternoon [it’s my “get more work done” strategy to buy some quiet time at my desk]. Dinner happened just about any time we were ready. If it was sunny out, dinner would be later. If it was rainy and we were stuck inside a lot, dinner would happen earlier. This is our new reality. Pills! Tightly scheduled meals! Here’s a peek at our morning pill party, and it’s pretty much the same pill party in the evening.

Because of the ulcer medication, things have to be timed and scheduled. The medicine has to be given on an empty stomach and without food. What?! It’s so easy to pill a Labrador if you can just use a little bit of food! That’s so not fair! Making a slurry ensured that his throat and tummy would be coated, thereby helping to get rid of that pesky ulcer. So, I tried several times to make a slurry of his medication in about 6ml of water and then use a syringe to squirt it down his throat. Tango was irritated at me and we both wound up wearing more medication than ever got in his belly.

In an ingenious moment, I decided that letting Tango drink the medicine would be way better that shoving it down his throat, so I got some chicken broth and started using that instead of water. I simply heat up that chicken broth, plop the pill in there, let it dissolve and let him drink the delicious concoction! Easy peasy! Tango drinks his medicine three times a day, thank goodness. The other trouble with that medication is that I have to give it to him two hours before or after he eats. So that’s a 4 hour timeframe in which we can’t do training and I can’t offer him a Kong (stuffed with the canned version of his new low-residue diet).

There’s so much medication, I had to get a pill container to keep it all straight. I’ve actually ordered a new one (hello, AmazonPrime!) that has four daily compartments. It’s that crazy.

This whole getting old thing is a little sucky in more ways than one! But, as my dad would say, “It beats the alternative!”

Here’s to continued improvement and eradication of ulcers! And to old dogs!

Should you get littermates? I don't usually get this question. Normally, I hear "Help, we got littermates!" That comes after the littermates are already home and the people are feeling understandably … END_OF_DOCUMENT_TOKEN_TO_BE_REPLACED

When Laurie took over the training of my 9-month old puppy, he had already been through 2 rounds of puppy school. Obviously, they had been failures. Laurie showed us how to get him under control using positive reinforcement as his main reward. He now…

The knowledge SDU provided is invaluable. Laurie’s willingness to share her calm logic and vast knowledge and patience about how to raise a happy dog (and happy dog people) has created harmony we did not have before. A big thanks to my sister who…