The first Take Your Dog to Work Day was in 1999. We’ve come a long way, baby! 300 companies participated in that first year. Now, thousands of companies are having dogs at work today! 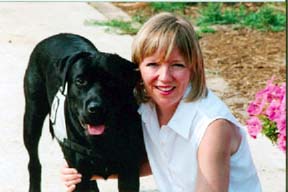 I started taking a dog to work in 2001. Rocky, our first service dog in-training, came to work with me every day at the Federal office where my husband and I worked.

It wasn’t easy — I was dealing with the Federal government and a dog in the workplace. But after some help from a Federal attorney in Florida who took his service dog in training to work with him every day, the government finally allowed the service dog in training on campus every day. There was an initial flurry of interest, but pretty soon Rocky and I were a familiar sight and no one gave us another look.

That’s not entirely true. There was a particularly stressful time when our agency had to perform layoffs. Almost every employee was at risk, and our human resources (HR) department was stressed from the pressure of ending employee’s federal career. During that time, some of the HR employees would stop by my office “just to talk.” What they were really coming for was to love on the dog. After the entire process was complete, several months later, some of the HR folks expressed their gratitude that there was a dog around  — just having the chance to pet a dog decreased their stress levels significantly, they said. Schooner and I “at work”

Now I work from home and every day is Take Your Dog to Work Day. Because I raise and train service dogs, sometimes my “work” involves public places like the doctor’s office, restaurants, libraries, concerts, office buildings, and shopping malls.

Some of the more interesting places I’ve been with the dogs:

Generally, the service dog in-training goes where I go. They need to learn how to handle many different situations and experiences before they are teamed with their human partner. We’d rather they get all the kinks out with us.

Does your workplace allow dogs? Just for today or on an ongoing basis?

Should you get littermates? I don't usually get this question. Normally, I hear "Help, we got littermates!" That comes after the littermates are already home and the people are feeling understandably … END_OF_DOCUMENT_TOKEN_TO_BE_REPLACED

Our family used Laurie Luck and Smart Dog University for training both of our very active labs. Laurie was amazing at helping our entire family learn to train and work with the dogs. The most helpful thing for us about both the group classes and in-h… END_OF_DOCUMENT_TOKEN_TO_BE_REPLACED

Working in the veterinary field has shown me how important positive reinforcement training for dogs is. When it came time to train my own dog, Quincy, Smart Dog University was my choice for training. Laurie is a calm force and true dog lover! Two yea… END_OF_DOCUMENT_TOKEN_TO_BE_REPLACED

Laurie’s group class was perfect for my distractible social butterfly pup (aptly named Zippy)! Her positive training methods make learning as much fun for the humans as for the dogs. Training is a lifelong (daily) bonding adventure, with Laurie’s… END_OF_DOCUMENT_TOKEN_TO_BE_REPLACED

The knowledge SDU provided is invaluable. Laurie’s willingness to share her calm logic and vast knowledge and patience about how to raise a happy dog (and happy dog people) has created harmony we did not have before. A big thanks to my sister who… END_OF_DOCUMENT_TOKEN_TO_BE_REPLACED

Gracie participated in two classes. Laurie is very knowledgable about dog training, very patient with owners and clearly loves her work. I especially remember the lesson about the settle mat. Laurie kept telling me to “wait, wait, she will figure i… END_OF_DOCUMENT_TOKEN_TO_BE_REPLACED

Laurie is someone Your Dog’s Friend depends on for good information on dog behavior and training presented in an engaging, understandable way. She has done free workshops for us; we have used her articles in our newsletter; and she is a trainer who… END_OF_DOCUMENT_TOKEN_TO_BE_REPLACED

When Laurie took over the training of my 9-month old puppy, he had already been through 2 rounds of puppy school. Obviously, they had been failures. Laurie showed us how to get him under control using positive reinforcement as his main reward. He now… END_OF_DOCUMENT_TOKEN_TO_BE_REPLACED