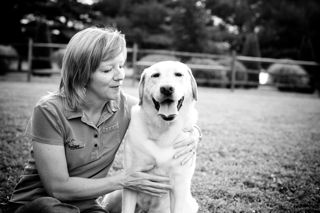 Tango and I have been practicing Nose Work. It's a relatively new sport, and for the first time on the East Coast, the Odor Recognition Trial (ORT) was offered.

This was a little bit of a big deal. First time it's been offered waaaay over here on the East coast. It's been a West coast sport for a couple years and is finally drifting over to us.

The trial is relatively easy: there are 12 boxes and Tango just needs to indicate the box that contains the scent (birch). He'd been rippin' it up at home — finding the correct box every single time. He was good! We were ready!

Yeah, except I wasn't ready. We approached the start line and I gave Tango the "Find it" cue. Except he wasn't looking at me. Being the happy Labrador that he is, he was quite enamored with the judges. Oh, and the spectators, he liked them quite a bit as well. The boxes that might or might not contain the odor – yeah, not so interested in those. Which was NOT a good thing.

Well, Tango was wrong. Or, should I say, I was wrong. I thought I was right, but one day later (tonight), Tango proved how good his nose was. And with that proof, it was really easy for me to shift the blame from him TO me.

Here's how it went down: it was dark and I was throwing Tango's tennis ball in the back yard. He typically chases it, somehow locating it in the dark, and always brings it back to me. I throw like a girl (go figure) and I must have tossed it into the lilac bush. The lilac bush, for the record, was pretty far away. I should get points just for getting it TO the bush. Never mind the fact that I threw it into the bushes; we'll just ignore that for now, ok?

Except that I thought it went into the grass. I prompted Tango to "find it." That's the same cue we use in Nose Work. It was pitch black outside. I thought the ball rolled through the Hostas and came to rest in the Lilac Bed. Tango kept looking up into the lilac bushes.

I knew quite well that the ball was not in the lilac bush. I distinctly heard it roll through the hostas! I cued "find it" again. Still, this crazy dog is looking upward! What is his problem?!

Finally, in frustration, I turned the back flood lights on. Guess what I saw? About eye level (to me) in the stupid lilac bush?

So clearly, the fact that Tango blew the ORT on Friday was on me. Not on him. He knew where his tennis ball was in the dark in the tree! Ok, so I was more than humbled.

I was a bit embarrassed. Not to mention I was crushed that *I* was the reason Tango didn't pass his ORT. It wasn't Tango. It was ME! Talk about humbled…

So. I'm not sure when our next chance at the ORT will be, but you better believe I'll train hard. I'll work my you-know-what off so I can be the handler Tango needs so he can pass the ORT. I have my marching orders: TRUST YOUR DOG!

Should you get littermates? I don't usually get this question. Normally, I hear "Help, we got littermates!" That comes after the littermates are already home and the people are feeling understandably … END_OF_DOCUMENT_TOKEN_TO_BE_REPLACED

Working in the veterinary field has shown me how important positive reinforcement training for dogs is. When it came time to train my own dog, Quincy, Smart Dog University was my choice for training. Laurie is a calm force and true dog lover! Two yea… END_OF_DOCUMENT_TOKEN_TO_BE_REPLACED

Our family used Laurie Luck and Smart Dog University for training both of our very active labs. Laurie was amazing at helping our entire family learn to train and work with the dogs. The most helpful thing for us about both the group classes and in-h… END_OF_DOCUMENT_TOKEN_TO_BE_REPLACED

When Laurie took over the training of my 9-month old puppy, he had already been through 2 rounds of puppy school. Obviously, they had been failures. Laurie showed us how to get him under control using positive reinforcement as his main reward. He now… END_OF_DOCUMENT_TOKEN_TO_BE_REPLACED

Laurie’s group class was perfect for my distractible social butterfly pup (aptly named Zippy)! Her positive training methods make learning as much fun for the humans as for the dogs. Training is a lifelong (daily) bonding adventure, with Laurie’s… END_OF_DOCUMENT_TOKEN_TO_BE_REPLACED

The knowledge SDU provided is invaluable. Laurie’s willingness to share her calm logic and vast knowledge and patience about how to raise a happy dog (and happy dog people) has created harmony we did not have before. A big thanks to my sister who… END_OF_DOCUMENT_TOKEN_TO_BE_REPLACED

Gracie participated in two classes. Laurie is very knowledgable about dog training, very patient with owners and clearly loves her work. I especially remember the lesson about the settle mat. Laurie kept telling me to “wait, wait, she will figure i… END_OF_DOCUMENT_TOKEN_TO_BE_REPLACED