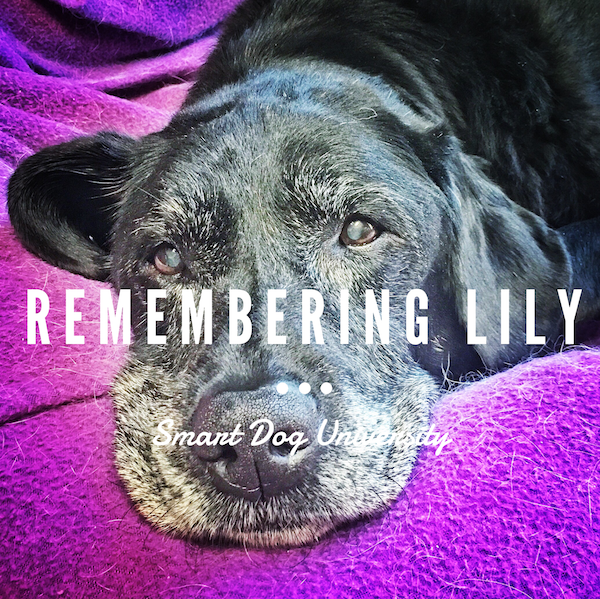 It’s taken me some time to write Lily’s obituary post.

I don’t know if I’ve been avoiding it because it’s just too hard to write it or if I think it needs to be perfect. But enough is enough. So here goes, imperfections and all…

Baby Lily working in public in her service dog cape

Lily was our matriarch.

The second service dog we raised (the first one to stay forever), Lily had a clear set of rules by which she lived her life. Feisty and fearless, Lily was a force. She was serious. She had a work ethic I wish I had. She’d do just about anything and never wanted a training session to end.

She was a Labrador, but she didn’t really like to retrieve and she wasn’t really into swimming.

She would retrieve if it was part of her job (if we were in a training session and I asked her to get her leash, for instance), but she was not the Labrador who would chase the ball for hours on end. And while she didn’t think too much of swimming, we couldn’t keep her out of Lake Anna where she’d fish all day long. Back and forth, head cocked to the side looking for minnows and blue gill, she’d be up to her belly in the lake from 9a until dark if we didn’t make her get out and rest.

She was one (of the three) reasons we went to the lake every year for vacation.

(The other two reasons were Nemo and Tango.) We built a ramp so the dogs could get out of the water more efficiently and Lily navigated the ramp like a seasoned sailor. Her balance and love of all things unstable served her well at the lake where she loved jumping on the Jet Ski with us and tooling around the lake for as long as we’d let her. She jumped on the wake board and would hang out on it all day with us. If we moved toward the boathouse, she was the first in (and the last out). She was also notorious for taking a flying leap into the wheelbarrow whenever we had it out — she delighted in the challenge of keeping her balance in the wheelbarrow whether it was empty or filled with dirt. The more unstable the surface, the more she loved it.

While she wasn’t the retriever of the family (Tango held that title), she delighted in running interference after we threw Tango’s bumper into the lake. She’d bark, jump, grab the ruff of his neck and do everything she could to cause mischief for Tango, who lived to retrieve. Interfering in Tango’s retrieving was one of the few instances of silliness that Lily allowed herself.

We joked that Lily was the stereotypical librarian who wore her hair in a severe bun and shushed everyone else all the time.

Two or maybe three times a year, though, Lily would let her hair down, change out of her conservative suit, and let it rip.

And watch out! She was a WILD woman! We loved seeing that side of her come out, even though we knew “Wild Lily” would disappear almost as quickly as she arrived. She would solicit play from the others, she’d blatantly steal something just to get our attention, or she’d just straight up jump on Tango or Nemo to get them to notice her and her craziness. Her “hair down” moments were short, but intense, and then she’d be back to Librarian Lily.

Lily got along with all the dogs that came through our house, but she had a special affinity for Tango, particularly as she got older.

It wasn’t uncommon for me to find her curled up with Tango in his bed, tucked in as tight as a little bug in a rug. She began to follow Tango and looked for him for clues as to what was going on as her hearing and vision deteriorated in her senior years. She was clearly comforted by his presence.

Lily was an athlete. She could keep up with the boys, often outrunning and outmaneuvering them whenever they got too close and she was in danger of “being captured.” For many years, she was my walking partner. She pushed me hard, too! It wasn’t uncommon for me to jog just to keep up with her fast pace. She kept up her walks until she was about 15, although her speed did diminish a bit the last six months of her life.

We loved all her different personalities and enjoyed her growing old with us.

A few years ago, we noticed her hearing was diminished. A year or two later, it was clear that her eyesight was fading, too. I was amused when Lily started “getting into trouble” by standing on the dishwasher door to lick the plates or when she’d shop from the recycle bin. “Look at her, learning to live a little,” I’d say.

It became clear about a year later that what we were seeing was the beginning of canine cognitive dysfunction.

Her “living a little” turned into staring at the wall, going to the wrong side of the door (going to the hinged side instead of the open side to go out, for example), walking endless circles, loss of house training, and other little slips that were clearly more than normal aging. We made accommodations for her. We put the mattresses directly on the floor so she could get into and out of bed easily (she began to fall out of bed frequently as her eyesight got worse, and I was afraid she’d seriously hurt herself). I got her a raised feeder when she lost her balance putting her head down to drink or eat. We developed an alternative form of communication that didn’t rely on her hearing. (I’d tap her lightly on her back, which caused her to turn in my direction, and then I could direct her to move where I needed her to go.)

She also had what I think was degenerative myelopathy.

So while she wasn’t in any pain, she gradually lost the ability to control her hind end. Lily hated our help and so I tried to let her do as much on her own as she could. We knew, though, that there’d come a day when she wouldn’t be able to function without our help. We tried lots of things to help her (sticky spray for her feet, rug runners on all our hardwood or tile floors, sticky treads for the floor, etc.) and those helped for about a year, but on her last day with us, she couldn’t stand up even with our assistance.

And while she wasn’t in pain, she also wasn’t able to do anything for herself so we made the decision to let her go.

Our fabulous veterinarian came to our house and we all gathered ’round, feeding Lily bacon as she was sedated and finally euthanized. It was peaceful, it was quick, it was merciful. And that’s what she deserved. She gave life every single day she had. We laugh and say we think she and Nemo must have struck a bargain at some point and he gave her some of his days — he died at barely 11 years old while Lily lived to a fabulous 15.5 years.

We took her the very next morning to be cremated. We waited there for her and she was back home with us less than 18 hours after she died.

She was a tiny little Labrador, but man, did she have a large personality.

We will miss that little sprite for the rest of our days.

Should you get littermates? I don't usually get this question. Normally, I hear "Help, we got littermates!" That comes after the littermates are already home and the people are feeling understandably … END_OF_DOCUMENT_TOKEN_TO_BE_REPLACED

Our family used Laurie Luck and Smart Dog University for training both of our very active labs. Laurie was amazing at helping our entire family learn to train and work with the dogs. The most helpful thing for us about both the group classes and in-h… END_OF_DOCUMENT_TOKEN_TO_BE_REPLACED

Working in the veterinary field has shown me how important positive reinforcement training for dogs is. When it came time to train my own dog, Quincy, Smart Dog University was my choice for training. Laurie is a calm force and true dog lover! Two yea… END_OF_DOCUMENT_TOKEN_TO_BE_REPLACED

Laurie’s group class was perfect for my distractible social butterfly pup (aptly named Zippy)! Her positive training methods make learning as much fun for the humans as for the dogs. Training is a lifelong (daily) bonding adventure, with Laurie’s… END_OF_DOCUMENT_TOKEN_TO_BE_REPLACED

The knowledge SDU provided is invaluable. Laurie’s willingness to share her calm logic and vast knowledge and patience about how to raise a happy dog (and happy dog people) has created harmony we did not have before. A big thanks to my sister who… END_OF_DOCUMENT_TOKEN_TO_BE_REPLACED

Gracie participated in two classes. Laurie is very knowledgable about dog training, very patient with owners and clearly loves her work. I especially remember the lesson about the settle mat. Laurie kept telling me to “wait, wait, she will figure i… END_OF_DOCUMENT_TOKEN_TO_BE_REPLACED

Laurie is someone Your Dog’s Friend depends on for good information on dog behavior and training presented in an engaging, understandable way. She has done free workshops for us; we have used her articles in our newsletter; and she is a trainer who… END_OF_DOCUMENT_TOKEN_TO_BE_REPLACED

When Laurie took over the training of my 9-month old puppy, he had already been through 2 rounds of puppy school. Obviously, they had been failures. Laurie showed us how to get him under control using positive reinforcement as his main reward. He now… END_OF_DOCUMENT_TOKEN_TO_BE_REPLACED