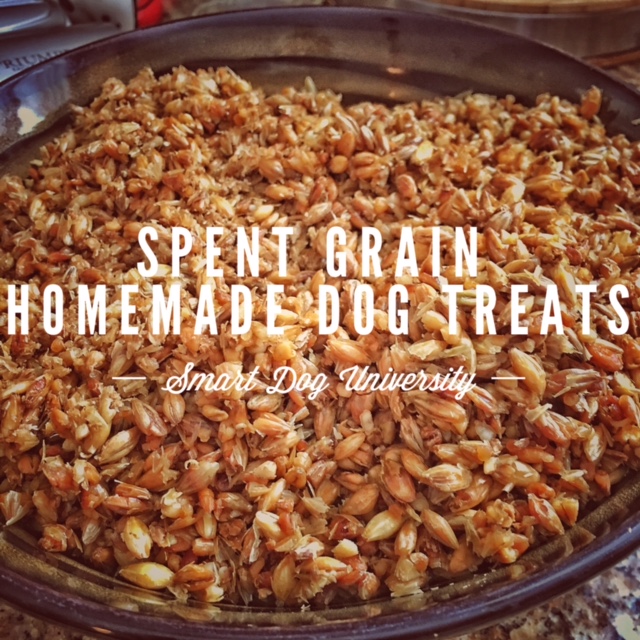 My husband is a hobby brewer (beer) and last weekend was a Brewing Weekend. I’m not going to pretend to understand it all (I’m only really interested in the final product), but during the brewing process (which looks a lot like the “double, double, toil and trouble” witches-around-a-cauldron scene from Shakespeare’s Macbeth), he winds up with some soggy “spent” grains. In the past, he’s thrown them in the yard (don’t get me started…) and we’ve noticed that the dogs love to eat the spent grain. Here’s what spent grain looks like:

Because I was home and not working (for once) on a weekend, I got a bee in my bonnet and decided to make spent grain homemade dog treats.

I surfed around a bit (thanks, Google) and found a great recipe on Deschutes Brewing (great beer, btw). You gotta love a brewery who takes the time to add a dog treat recipe to their website. Anyway, it’s about as simple as it gets — four basic ingredients: peanut butter, eggs, spent grain, and flour.

You just mix it all together with your hands (always fun to roll up my sleeves and get right into the mix with my hands), roll it out, and then use whatever cookie cutters you have. I used hearts (it was just Valentines Day, y’know), dog bones, and of course a Labrador!

The raw cookies ready to be baked! These things smell DELISH!

Those are the raw cookies. Wanna hear a secret? I tasted the dough. Raw. With eggs. And I didn’t get salmonella. I know, I know. It can happen. I live life on the edge. I’m a risk-taker like that.

That cookie dough wasn’t bad. If I was really going to dig in, I’d need some sugar, but the dogs don’t have the same sweet tooth we humans do so they’re just fine without it.

So those are the finished spent grain homemade dog treats! The dogs said they loved them. SOMEONE ate half a plate from the counter. There are only two dogs who can actually reach that high [::cough Nemo:: ::cough Schooner::], but there isn’t any incriminating evidence upon which to convict. So I guess they’re all innocent. Yeah, right.

Spent grain, by the way, can be acquired fairly easily if you live near a brewery or if you know some home brewers. Do not give the dogs hops in any form — that’s a big ol’ no-no.

Should you get littermates? I don't usually get this question. Normally, I hear "Help, we got littermates!" That comes after the littermates are already home and the people are feeling understandably … END_OF_DOCUMENT_TOKEN_TO_BE_REPLACED

Our family used Laurie Luck and Smart Dog University for training both of our very active labs. Laurie was amazing at helping our entire family learn to train and work with the dogs. The most helpful thing for us about both the group classes and in-h… END_OF_DOCUMENT_TOKEN_TO_BE_REPLACED

Working in the veterinary field has shown me how important positive reinforcement training for dogs is. When it came time to train my own dog, Quincy, Smart Dog University was my choice for training. Laurie is a calm force and true dog lover! Two yea… END_OF_DOCUMENT_TOKEN_TO_BE_REPLACED

The knowledge SDU provided is invaluable. Laurie’s willingness to share her calm logic and vast knowledge and patience about how to raise a happy dog (and happy dog people) has created harmony we did not have before. A big thanks to my sister who… END_OF_DOCUMENT_TOKEN_TO_BE_REPLACED

Gracie participated in two classes. Laurie is very knowledgable about dog training, very patient with owners and clearly loves her work. I especially remember the lesson about the settle mat. Laurie kept telling me to “wait, wait, she will figure i… END_OF_DOCUMENT_TOKEN_TO_BE_REPLACED

Laurie is someone Your Dog’s Friend depends on for good information on dog behavior and training presented in an engaging, understandable way. She has done free workshops for us; we have used her articles in our newsletter; and she is a trainer who… END_OF_DOCUMENT_TOKEN_TO_BE_REPLACED

When Laurie took over the training of my 9-month old puppy, he had already been through 2 rounds of puppy school. Obviously, they had been failures. Laurie showed us how to get him under control using positive reinforcement as his main reward. He now… END_OF_DOCUMENT_TOKEN_TO_BE_REPLACED

Laurie’s group class was perfect for my distractible social butterfly pup (aptly named Zippy)! Her positive training methods make learning as much fun for the humans as for the dogs. Training is a lifelong (daily) bonding adventure, with Laurie’s… END_OF_DOCUMENT_TOKEN_TO_BE_REPLACED