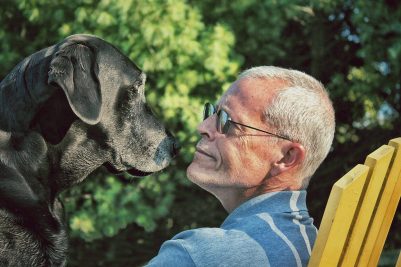 Nemo died a week ago today. It was sudden and unexpected.

I canceled classes last Tuesday. It was sudden and unexpected.

Last Wednesday, we had Nemo cremated. It was sudden and unexpected.

There’s no good way to lose a dog.

Whether it’s sudden and unexpected or planned and scheduled. You’re still down a dog, either way. It doesn’t matter if the dog was old or young. Or in between, like Nemo. When all is said and done, it still sucks. You still cry. It still hurts.

It was a relatively normal day for us, last Tuesday.

I had taken Tango to the veterinarian that morning to get some lumps and bumps checked. (To think, I was at the veterinarian that morning with a dog that would live to see another day when the dog that would die that day, was at home eating a Kong…it still stings.) I got home with Tango, let all the dogs out (ran around with them all in the yard) and then worked on my computer after I got them all back in and settled down.

When I stopped working to make lunch, I gave all the dogs another Kong and resumed work at my desk again. Nothing out of the ordinary from any of the dogs. No overt signs of distress or any symptoms at all, really.

Nemo and Lily wanted out to bark at someone making a delivery at about 4:05p, so I obliged and let them bark and wag at the fence. About five minutes later, I heard my husband’s diesel truck in the driveway, let Schooner out to join the fray so they could all do their normal “welcome home parade” and escort my husband inside.

I was fixing dinner at the stove and noticed Nemo moving more slowly. I looked over, asked “You ok, Neems?” and he crumpled to the floor.

I screamed for my husband to come quickly and the rest is fairly straightforward: Nemo died right there on the kitchen floor. I think he was gone almost instantly.

Thanks to technology, I have the whole thing on video. Nanny cams are great most of the time until they capture the death of your dog.

Until now, I’d always buried my dogs at my parent’s place.

With this set of dogs (Tango, Lily, Nemo, and Schooner), we decided years ago that we didn’t want to bury them, but preferred cremation so that if we moved, we could always have the dogs with us.

I also knew that I didn’t ever want any of them to be in a freezer to wait for cremation, nor did I ever want to leave them anywhere and walk away without them — even if I knew I’d have the ashes back in a week. That was a showstopper for me, the leaving the dog behind. I couldn’t ever do it. I’d rather bury a dog than leave him behind.

With the burgeoning number of people who consider their pet part of the family, we now have another option: private, attended cremation.

We were able to take Nemo to Agape Pet Services the very next day, we were able to be with Nemo right up until his cremation, and we could wait for his ashes. Agape Pet Services has a private area for the attended cremation so you can see as little or as much of the process as you’d like. The actual cremation, of course, cannot be viewed, as the equipment must be totally sealed, but you are able to see everything else. [I’m not getting paid by Agape, or otherwise compensated. They don’t even know I’m mentioning them. They were just super to us during our most raw, vulnerable moments.]

I was impressed with their tact, kindness, and understanding. The entire process was described to us and we were given options at every step. (Did we want to see him placed into the equipment, did we want to see his remains immediately after cremation, or only after his remains were refined, etc.) There aren’t any wrong answers or decisions — it’s a personal process and they respect the choices of their clients.

We had Nemo back home with us less than 24 hours after he died.

It was a tremendous relief and comfort to us that allowed us to begin healing immediately. We’re still grieving Nemo’s passing, but at least we’re all back together under one roof again.

We’re still bewildered and feel adrift at the sudden emptiness.

There are three other dogs here who demand feeding and attention, though, so that’s the good news.

The dogs have all reacted differently, no surprise there.

I’ll talk more about their processing of the event later, after I’m through this piece of the healing… Until then, we are comforted that (1) I was home (I’d been in Kansas City teaching until just three days before Nemo died) (2) that Nemo’s main person (my husband) was home, (3) Nemo was elated to greet my husband at the gate, and (4) he appeared to be gone in almost an instant. It’s hard — everything I do reminds me of Nemo’s absence. I need only three dog bowl at meal time, I don’t have anyone to eat the tissues out of the trash, the squirrels are taking over the bird feeder, there are only three noses to greet me when I open the door…

This passage from Irving Townsend brings me comfort.

“We who choose to surround ourselves with lives even more temporary than our own, live within a fragile circle, easily and often breached.
Unable to accept its awful gaps, we still would live no other way.
We cherish memory as the only certain immortality, never fully understanding the necessary plan.”

Should you get littermates? I don't usually get this question. Normally, I hear "Help, we got littermates!" That comes after the littermates are already home and the people are feeling understandably … END_OF_DOCUMENT_TOKEN_TO_BE_REPLACED

Laurie is someone Your Dog’s Friend depends on for good information on dog behavior and training presented in an engaging, understandable way. She has done free workshops for us; we have used her articles in our newsletter; and she is a trainer who… END_OF_DOCUMENT_TOKEN_TO_BE_REPLACED

Our family used Laurie Luck and Smart Dog University for training both of our very active labs. Laurie was amazing at helping our entire family learn to train and work with the dogs. The most helpful thing for us about both the group classes and in-h… END_OF_DOCUMENT_TOKEN_TO_BE_REPLACED

Working in the veterinary field has shown me how important positive reinforcement training for dogs is. When it came time to train my own dog, Quincy, Smart Dog University was my choice for training. Laurie is a calm force and true dog lover! Two yea… END_OF_DOCUMENT_TOKEN_TO_BE_REPLACED

Laurie’s group class was perfect for my distractible social butterfly pup (aptly named Zippy)! Her positive training methods make learning as much fun for the humans as for the dogs. Training is a lifelong (daily) bonding adventure, with Laurie’s… END_OF_DOCUMENT_TOKEN_TO_BE_REPLACED

The knowledge SDU provided is invaluable. Laurie’s willingness to share her calm logic and vast knowledge and patience about how to raise a happy dog (and happy dog people) has created harmony we did not have before. A big thanks to my sister who… END_OF_DOCUMENT_TOKEN_TO_BE_REPLACED

When Laurie took over the training of my 9-month old puppy, he had already been through 2 rounds of puppy school. Obviously, they had been failures. Laurie showed us how to get him under control using positive reinforcement as his main reward. He now… END_OF_DOCUMENT_TOKEN_TO_BE_REPLACED