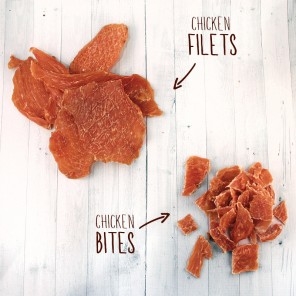 I’m a fan of The Honest Kitchen (THK) because their ingredients are human grade and of the highest quality.

When they sent me Joyful Jerky to review, I was excited to let my dogs try it. Joyful Jerky comes in two varieties: beef and chicken. I received the chicken variety to try.

I have been leery of chicken jerky since the reports came out several years ago that chicken sourced in China was associated with the death of many dogs. In fact, THKs Joyful Jerky is the first chicken jerky I’ve given my dogs since the recalls began almost a decade ago.

I did my research, even with THK, and was relieved when they declared that none of their chicken is sourced from China! In fact, Joyful Jerky chicken treats contain just 3 ingredients (chicken, salt, celery juice powder, contain all-natural cage-free chicken, and do not contain glycerin or fillers.

I was sold! So were my dogs.

I used the Joyful Jerky on a veterinary visit where high value treats are a must for Schooner, our chicken-hearted Great Dane. He may be large, but he is not the bravest soul.

It was easy to break the jerky into small, bite-sized bits so it lasted longer.

Unlike my Labradors, who will pretty much eat whatever is put in front of them, Schooner is a bit more, shall we say, picky. He’d rather I describe him as having a discerning palate.

Whatever you want to call it, I generally have to go through several different treats before I find something that meets his taste standards.

I was super excited when he tried to steal some of them out of the container while I wasn’t watching. That’s when I knew we had something good!

We went through the whole bag there at the veterinary exam. This was a particularly invasive visit, as we’re still battling the pesky (and funky) bacteria on the top of his paw. The veterinarian had to get some skin scrapings (ouch!) and take a good look at that foot. Which meant Schoons needed as much reinforcement and distraction as possible. I kept popping Joyful Jerky in his mouth and he kept his focus on me instead of what was happening to his paw.

Voila! Before Schooner knew it, we were done and heading out the door.

And while I’m still dealing with that foot, I now have a new tool in my “happy veterinary visit” arsenal – Joyful Jerky!