A service dog needs to be comfortable in many different environments. They've got to be ok with lots of different noises, locations, people, surfaces – nothing should surprise them when they're out in the world working with their partner.

Talos and I ventured to D.C. at peak cherry blossom time. And we went on the Metro system. I was a little apprehensive. Trains were new to Talos. They make a lot of noise. The stations are dark. They're a little like riding a roller coaster, pitching left and right.

Talos went through the card-reader gate (a narrow contraption with guillotine like gates that slide shut between passengers so only one person can get through at a time) without a hitch. Didn't even look crossways at it.

I breathed a sigh of relief.

Time to board the train! We got on with a few families headed down to see the cherry blossoms. Thankfully, there were two little girls. There's nothing that Talos loves more than small children. As the train departed the station, he looked at me, his face concerned. I spoke softly, gave him a few pieces of cheese, and he decided it was not worth panicking about.

Another sigh of relief.

A few more stops and he'd completely forgotten he was on the train. The little girls, captivated by the big dog sitting right in front of them!!, decided to baby-sit Talos. For which I'll be forever grateful. Here's a picture of one of them telling Talos a story. He was paying close attention. 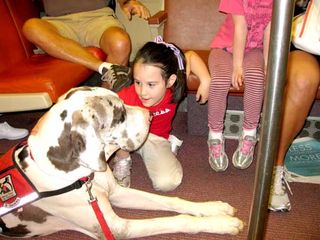 We had to change trains at Metro Center. For those not familiar with the Washington, D.C. Metro system, Metro Center is the station where all four Metro lines converge. It's the central hub. It's huge. It's loud. It's crazy. It's dark. I was scared because I didn't know where to go or how to catch my next train. Thank goodness for the kindness of strangers – the mom of one of the girls held my hand through the entire trip, went out of her way to find (and ride) the elevator with us (Talos can't do escalators yet), and got us on the right train. Her five-year old daughter continued to baby-sit Talos – soothing him when the loud trains whooshed past us, frightening Talos.

Finally we made it to the correct stop and I bade my new friends farewell. I think the little girl would have had just as much fun sitting with Talos as seeing the cherry blossoms! Talos was sad to see her go, as was I. 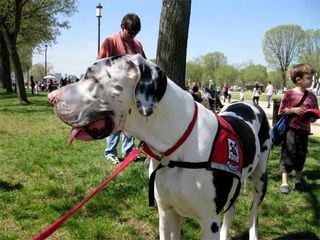 We met up with three other dogs in training from Service Dogs of Virginia. Here's their blog  about the day. We saw cherry blossoms. We saw loud, exhaust spewing buses. We were crushed in crowds of people. We saw the Washington Monument (Talos was unimpressed). Here's a quick snippet of our ride down, the cherry blossoms, and the ride home:

The ride home on Metro was a crush of people. The crowds were phenomenal. At one point, I couldn't see Talos' head because there were so many people packed into the train. He didn't even notice. Or if he did, he didn't care. It was if he did this trip everyday. On the way home, I swear he was bored.

The people traveling on Metro couldn't have been kinder. Not one person complained, squealed, or shied away from riding the train with a dog. He, in return, was a gentleman, although at one point he did lay down on a man's feet. I didn't realize it until it was the guy's stop and he politely asked Talos for his feet back. Like I said, the other train riders really helped us have a fantastic experience.

Another successful socialization trip for Talos and I. I think T's got the makings of a fantastic service dog. He's steady, even-keeled, and solid as a rock. I'm as proud as a mom when her child takes it's first step.

Should you get littermates? I don't usually get this question. Normally, I hear "Help, we got littermates!" That comes after the littermates are already home and the people are feeling understandably … END_OF_DOCUMENT_TOKEN_TO_BE_REPLACED

Laurie is someone Your Dog’s Friend depends on for good information on dog behavior and training presented in an engaging, understandable way. She has done free workshops for us; we have used her articles in our newsletter; and she is a trainer who… END_OF_DOCUMENT_TOKEN_TO_BE_REPLACED

The knowledge SDU provided is invaluable. Laurie’s willingness to share her calm logic and vast knowledge and patience about how to raise a happy dog (and happy dog people) has created harmony we did not have before. A big thanks to my sister who… END_OF_DOCUMENT_TOKEN_TO_BE_REPLACED

Working in the veterinary field has shown me how important positive reinforcement training for dogs is. When it came time to train my own dog, Quincy, Smart Dog University was my choice for training. Laurie is a calm force and true dog lover! Two yea… END_OF_DOCUMENT_TOKEN_TO_BE_REPLACED

Laurie’s group class was perfect for my distractible social butterfly pup (aptly named Zippy)! Her positive training methods make learning as much fun for the humans as for the dogs. Training is a lifelong (daily) bonding adventure, with Laurie’s… END_OF_DOCUMENT_TOKEN_TO_BE_REPLACED

When Laurie took over the training of my 9-month old puppy, he had already been through 2 rounds of puppy school. Obviously, they had been failures. Laurie showed us how to get him under control using positive reinforcement as his main reward. He now… END_OF_DOCUMENT_TOKEN_TO_BE_REPLACED

Our family used Laurie Luck and Smart Dog University for training both of our very active labs. Laurie was amazing at helping our entire family learn to train and work with the dogs. The most helpful thing for us about both the group classes and in-h… END_OF_DOCUMENT_TOKEN_TO_BE_REPLACED

Gracie participated in two classes. Laurie is very knowledgable about dog training, very patient with owners and clearly loves her work. I especially remember the lesson about the settle mat. Laurie kept telling me to “wait, wait, she will figure i… END_OF_DOCUMENT_TOKEN_TO_BE_REPLACED