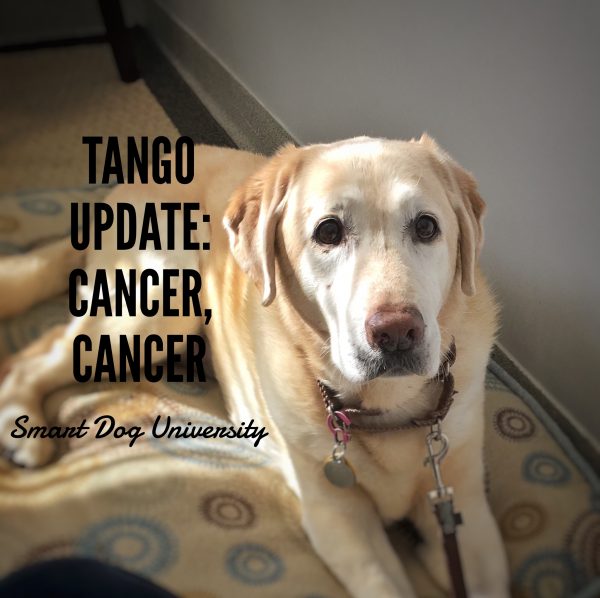 It’s been a little crazy around here the last few months with all the cancer talk.

I’m getting tired of writing that, actually. Too much crazy, too much roller coaster. We need some boring around here. Some seriously boring boredom.

Back in January, Tango had an ultrasound due to some abnormal blood results.

(People, heed my warning: do the blood work — just do it. This probably saved Tango’s life.) His globulin numbers were up which can be an indication of cancer. We had done a chest x-ray earlier and that was clear, so I really thought the ultrasound was just a precaution.

Tango recovers from a splenectomy

Hahahaha, no. Tango underwent surgery that day to remove his spleen and it’s gigantic growth.

The thing was sent away for biopsy and that set off a six week mystery that has just recently been solved. Initially, one type of cancer was found. But then a second opinion found a different type of cancer. So more tests (i.e. more $$) and more reviews by a panel of 25 pathologists.

Still disagreements between “the authorities” about which of the two different cancers Tango had.

Finally, all of Tango’s medical records were sent to a cancer genius in California at UC Davis. Even he wanted to run more tests! Clearly, this was a complicated case.

Some six weeks later, the final results were in and we headed to the oncologist in Leesburg, VA, for our consult. We have an answer at last!

Tango has two different types of cancer. That’s the reason for all the disagreements — both conclusions were correct. He has lymphoma and sarcoma. That’s definitely not the result I’d been hoping for.

Every three months, Tango has to have an ultrasound to make sure there’s nothing growing in his belly. Every 6 months he has to have chest x-rays and blood work. Expensive? Yes. Invasive? No way. And that’s the most important part.

We are getting back to normal here now.

Notice I didn’t say “we’re back to normal.” I’m still guarded, not willing to believe yet that we’re out of the woods. You don’t worry yourself silly for six weeks and then <poof> it’s all gone instantly with “good news.” I watch Tango like a hawk. Is he panting? Why is he panting? Is he drinking more water? Is he sleeping more than usual? Has he lost the pep in his step? It’s constant surveying and cataloging, and monitoring. I think he’s growing weary of me. Because I also kiss him nonstop as well. It’s the price you pay when you have a crazy, over zealous, protective owner like me.

I have a couple of short out-of-town work trips coming up that I was stressing out about.

I didn’t want to leave for more than a couple of hours if he had to start chemotherapy or any other kind of treatment. The oncologist has assured me that he’ll be fine for these two trips (the two trips will be over in a couple weeks). Right now, he’s sacked out in his chair, just like normal. Everything has been fairly normal, so I’m going to hope that it’ll stay boring and normal. Normal and boring. Ahh, that sounds divine.

It’s what I do. But at least I know that it’ll be worry for worry’s sake, not worry for a real reason.

Should you get littermates? I don't usually get this question. Normally, I hear "Help, we got littermates!" That comes after the littermates are already home and the people are feeling understandably … END_OF_DOCUMENT_TOKEN_TO_BE_REPLACED

Working in the veterinary field has shown me how important positive reinforcement training for dogs is. When it came time to train my own dog, Quincy, Smart Dog University was my choice for training. Laurie is a calm force and true dog lover! Two yea… END_OF_DOCUMENT_TOKEN_TO_BE_REPLACED

Our family used Laurie Luck and Smart Dog University for training both of our very active labs. Laurie was amazing at helping our entire family learn to train and work with the dogs. The most helpful thing for us about both the group classes and in-h… END_OF_DOCUMENT_TOKEN_TO_BE_REPLACED

Gracie participated in two classes. Laurie is very knowledgable about dog training, very patient with owners and clearly loves her work. I especially remember the lesson about the settle mat. Laurie kept telling me to “wait, wait, she will figure i… END_OF_DOCUMENT_TOKEN_TO_BE_REPLACED

When Laurie took over the training of my 9-month old puppy, he had already been through 2 rounds of puppy school. Obviously, they had been failures. Laurie showed us how to get him under control using positive reinforcement as his main reward. He now… END_OF_DOCUMENT_TOKEN_TO_BE_REPLACED

The knowledge SDU provided is invaluable. Laurie’s willingness to share her calm logic and vast knowledge and patience about how to raise a happy dog (and happy dog people) has created harmony we did not have before. A big thanks to my sister who… END_OF_DOCUMENT_TOKEN_TO_BE_REPLACED

Laurie’s group class was perfect for my distractible social butterfly pup (aptly named Zippy)! Her positive training methods make learning as much fun for the humans as for the dogs. Training is a lifelong (daily) bonding adventure, with Laurie’s… END_OF_DOCUMENT_TOKEN_TO_BE_REPLACED

Laurie is someone Your Dog’s Friend depends on for good information on dog behavior and training presented in an engaging, understandable way. She has done free workshops for us; we have used her articles in our newsletter; and she is a trainer who… END_OF_DOCUMENT_TOKEN_TO_BE_REPLACED