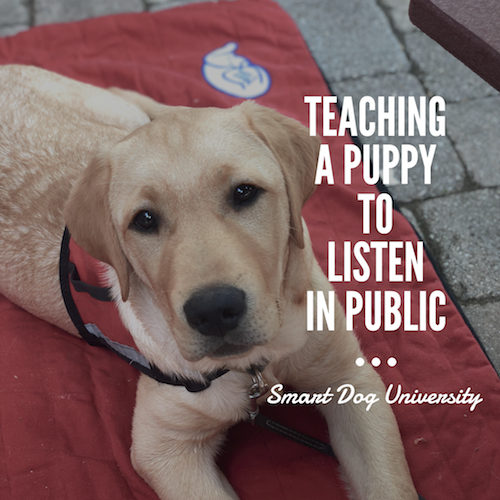 Teaching a puppy to listen in public takes time.

Rogan is slated to be a service dog when he grows up.

If you’ve ever seen a service dog working with his parter, you may have remarked “He’s so calm!” Or “”Nothing fazes him.” That’s because from puppyhood, that dog has been carefully exposed to public situations, has learned basic “good manners” behaviors, and has had frequent opportunities to practice in public with a trainer before being paired with someone with a disability.

Rogan went with me to do some shopping today.

I had two stops on my agenda: Dick’s Sporting Goods for some running shorts and Wegmans for groceries. I intentionally chose those two stops today because neither was imperative. If things went south in a hurry, I could abandon ship and head back home without any serious consequences. As opposed to, say, bringing Rogan with me to the dentist where it’s a little harder to just get up and leave.

Getting a young dog used to automatic sliding doors, mannequins, public address systems, fitting rooms, carts, strollers, bright lights, shiny floors — the list goes on — is relatively easy if it’s done early enough in the dog’s life and if it’s done at a pace that let’s the dog adjust and settle into each situation. When I take Rogan in public, I always have small, delicious treats (cat treats work great) and Rogan is always my top priority.

For instance, as we went entered Dick’s Sporting Goods today, I was hopeful I could get some shopping done, but I was ready to leave if Rogan couldn’t handle the excitement and the stimulation that a new store (to him) might bring. Rogan was a rock star — his eyes were alert, his tail was waggy, and he was eager to investigate. As he checked-in with me, I’d allow him to sniff the strange looking mannequin (Rogan wagged so hard, I think he was expecting some pets!). This allows the young dog to go at his own pace, to investigate new things, and to be reinforced when he checks back in with his trainer.

Four new pairs of running shorts are now in my dresser, as Rogan found shopping in the athletic store to be somewhat of a breeze.

Our next stop was Wegmans where I needed to get some basics at the grocery store.

Grocery stores can be a nightmare for a trainer and absolute heaven for a dog in training. So much food is so easily accessible. The bread aisle is almost always the worst place — so many delicious smells right at nose level for a dog. It’s hard to compete with 100 loaves of freshly baked bread! Another challenging area is the bulk food aisle. Rogan scored a gummy bear on the floor — he saw it before I did. It’s hard to compete with free food on the floor! He’ll get better at leaving stuff alone (as soon as I get better at noticing it!) as we progress with training in public.

Some of the hardest tasks for a social dog like Rogan, however, is sticking with me instead of walking up to all the people who say “Oh! What a cute dog!” as they pass us.

I’m proactive, but sometimes the struggle for Rogan is real! Most people ask about what Rogan is doing, what he’s training for, and they ask if they can pet him. If he’s under a reasonable degree of control, I usually allow the person to greet Rogan. It gives us a perfect training scenario — Rogan needs to learn how to greet people nicely and then how to disengage and come back to me when asked. Plus, at his stage of development, it’s always good for him to have positive experiences with strangers in public.

Relaxing after a big day of shopping.

Much of what I do is preventing problems before they start.

I spend most of my time watching Rogan and very little time socializing with the people in the store. It’s important to be able to predict what Rogan is likely to do when we go past a family with six kids who are taking the whole aisle. How Rogan will behave when passing the luncheon meat counter? These are all questions in my mind as we’re in public. For the most part, our outings right now involve me getting Rogan’s attention before it starts to wander, keeping him occupied throughout stimulating territory (maneuvering through the aforementioned six kids + a cart
in the aisle), and reinforcing him for all of his good choices.

All the training pays off, though! And quickly!

If I do this for a month or so with Rogan, I will have developed a habit for Rogan: checking in frequently with me. Which means I’m not fighting for his attention. That’ll just be what he does “naturally.” From there, we can progress into more complex and distracting situations more quickly because the basics are installed and working smoothly.

Rogan’s still a puppy and his training is still in the early stages. We’ve got a lot more left to accomplish. Check back frequently — we’ll have more adventures to share!

Should you get littermates? I don't usually get this question. Normally, I hear "Help, we got littermates!" That comes after the littermates are already home and the people are feeling understandably … END_OF_DOCUMENT_TOKEN_TO_BE_REPLACED

When Laurie took over the training of my 9-month old puppy, he had already been through 2 rounds of puppy school. Obviously, they had been failures. Laurie showed us how to get him under control using positive reinforcement as his main reward. He now… END_OF_DOCUMENT_TOKEN_TO_BE_REPLACED

The knowledge SDU provided is invaluable. Laurie’s willingness to share her calm logic and vast knowledge and patience about how to raise a happy dog (and happy dog people) has created harmony we did not have before. A big thanks to my sister who… END_OF_DOCUMENT_TOKEN_TO_BE_REPLACED

Laurie is someone Your Dog’s Friend depends on for good information on dog behavior and training presented in an engaging, understandable way. She has done free workshops for us; we have used her articles in our newsletter; and she is a trainer who… END_OF_DOCUMENT_TOKEN_TO_BE_REPLACED

Working in the veterinary field has shown me how important positive reinforcement training for dogs is. When it came time to train my own dog, Quincy, Smart Dog University was my choice for training. Laurie is a calm force and true dog lover! Two yea… END_OF_DOCUMENT_TOKEN_TO_BE_REPLACED

Our family used Laurie Luck and Smart Dog University for training both of our very active labs. Laurie was amazing at helping our entire family learn to train and work with the dogs. The most helpful thing for us about both the group classes and in-h… END_OF_DOCUMENT_TOKEN_TO_BE_REPLACED

Laurie’s group class was perfect for my distractible social butterfly pup (aptly named Zippy)! Her positive training methods make learning as much fun for the humans as for the dogs. Training is a lifelong (daily) bonding adventure, with Laurie’s… END_OF_DOCUMENT_TOKEN_TO_BE_REPLACED

Laurie Luck has twenty years of immersion in the World of Dogs. She earned a M.A. in psychology, served as President of the Certification Council for Professional Dog Trainers (CCPDT), and is Faculty at Karen Pryor Academy for Animal Training and Behavior. A speaker at local and national educational events, Laurie is forever open to learning. In addition, Laurie raises puppies for a service dog organization, and loved nothing more than to work with her Labrador, Tango, as a certified therapy team.
Return to top of page
Copyright © 2022 Smart Dog University · Website design by PC Creative, development by Datachieve Digital