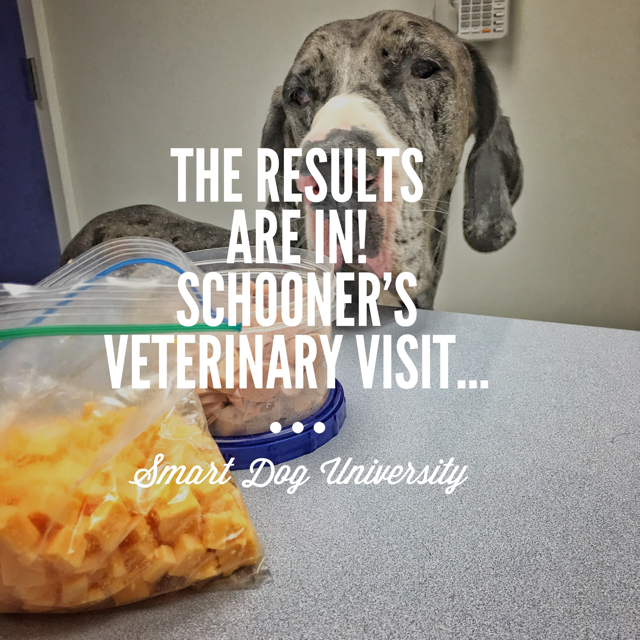 Not long after we brought Schooner back home (he was gone at service dog training camp for 15 months), I took him on a field trip to our veterinarian. At that visit, I realized that Schoons was a little scared at the vet. He didn’t want to wag his tail, he stayed away from anyone who even just wanted to pet him, and was generally uncomfortable at that first visit. That was a year ago. In the last article, I detailed our “dry run,” where Schooner accompanied Nemo to a veterinary visit. Schoons got to hang out, eat some food, and get some lovin’ — and he did great!

While I was happy that Schooner did great in the vet exam, I was still a little worried about what would happen when the veterinarian and the technicians focused on him, instead of on Nemo. Our appointment was just a few days after that dry run, so I was hopeful that Schooner would do alright. This veterinary visit was going to include a comprehensive exam, a vaccination, blood draw (for heartworm test), and a look at a tricky spot on Schooner’s paw. That’s a fairly tall order for any dog, but I’d be lying if I said I wasn’t a little apprehensive as we walked in.

Nemo is a “stable pony” for Schooner

Because Schooner did so well when he accompanied Nemo a few days earlier, I thought “Why not take Nemo again?” In the horse world, the primary task of a lead pony is to help a racehorse with its training, both in practice and on the day of a race. So Nemo was our stable pony for the veterinary visit. Nemo’s generally always a happy camper, even more so if there are people who will love on him and give him treats. My hope was that Schoons would go in thinking “Oh, nice. We just did this very same thing and it wasn’t so bad.” Nemo led the way into the exam room, asking anyone who would listen to feed him treats, and [yahoo!] Schooner followed suit: “Hey, I want a treat, too, please!”

Change Up the Order

Normally, the technician gets the vitals of the dog: pulse, temperature, respiration rate, checks teeth, etc. I asked our technician if she could first visit with Schooner for a minute, just feeding him treats (and Nemo, too, of course) and hang out with us casually. That worked great, Schooner’s tail was wagging as much as Nemo’s. When it was time for her to use her stethoscope, she showed it to him and let him sniff it — also a big help. Because the temperature taking is a little, um, invasive, I asked if we could wait and do that one at the end (hahaha). Not a problem, we could go in any order, she said.

The blood draw was the most important piece of that veterinary visit, so I requested that we get that done first. I didn’t want to do all the other stuff to him which might put him in an agitated state, and then try to get the blood draw. The heartworm test was the highest priority, so we jumped to that one first. If that went well, we could then continue on, but if it stressed him out too much, I could easily leave then and would still have gotten a lot accomplished.

One Step at a Time

Another technician came in to assist with the blood draw and we took a minute to let Schooner sniff and investigate (and eat treats!) before proceeding. They allowed Schooner to be in any position he preferred, saying they could work around his comfort. [This is huge for a wary, timid, or fearful dog!] I was feeding treats to Schoons the entire time. They were efficient and the whole blood draw was over seemingly before it even started. [Another bonus!]

The blood draw went so well — it didn’t seem to throw Schooner much at all. Onward with the rest of the veterinary visit! The veterinarian came in, sat on the floor, and fed both dogs treats while he let Schooner approach and investigate. As he was looking at me and somewhat ignoring Schooner, he started to pet him and just get his hands on Schoons in a casual, non-veterinary exam kind of way. Having Nemo there didn’t make things easier for the veterinarian or the technicians (or me), but it did make it easier for Schooner because we could talk to and feed Nemo and let Schooner sidle up at his own pace. Every step of the way, I could see that Schooner seemed a little less concerned when he saw Nemo pushing his way into the scene.

Our veterinarian was able to conduct a full exam on Schooner, including looking into his ears, eyes, mouth, and take a look at that pesky foot. It was a small sore spot on his foot, but because it’d been there for several months, our veterinarian wanted to take a closer look and see what was going on. While still sitting on the floor (and Schoons standing), he got a scraping and put it under the microscope. Bacteria, yuk. Schooner’s on a topical antibiotic for awhile to help eliminate it now.

The very last step was a vaccination. That’s where Schooner said, “Uh, I’m done now, right?” When he saw the technician come in again, I saw his first real avoidance behavior. This was a quick vaccination, easy to give, so I was able to feed Schooner while it went right in with hardly a flinch from the big dog.

Easy In, Easy Out

Because I had almost 250 pounds of dog at the end of the leashes, I asked if I could check out from right there in the exam room, instead of holding two dogs in the lobby dodging other people and pets. Both Schoons and Nemo are friendly to other dogs and people, it was one less thing to distract me. I did all the paperwork and transactions from the comfort of the exam room and then we breezed right on out when we were done. Couldn’t have been smoother!

With the great veterinarian and staff, that was the best veterinary visit I could hope for. I joked with Dr. Cook: “Who’d have thought? Training to the rescue!” We had a good laugh and appreciated the value of training to keep veterinary visits stress- and fear-free.

Talk with your veterinarian — see if some of the options I used with Schooner might also be available at your dog’s veterinary hospital:

Talk back! What has worked for you and your dog at the vet? Share your ideas in the comments!

Should you get littermates? I don't usually get this question. Normally, I hear "Help, we got littermates!" That comes after the littermates are already home and the people are feeling understandably … END_OF_DOCUMENT_TOKEN_TO_BE_REPLACED

Laurie is someone Your Dog’s Friend depends on for good information on dog behavior and training presented in an engaging, understandable way. She has done free workshops for us; we have used her articles in our newsletter; and she is a trainer who… END_OF_DOCUMENT_TOKEN_TO_BE_REPLACED

Laurie’s group class was perfect for my distractible social butterfly pup (aptly named Zippy)! Her positive training methods make learning as much fun for the humans as for the dogs. Training is a lifelong (daily) bonding adventure, with Laurie’s… END_OF_DOCUMENT_TOKEN_TO_BE_REPLACED

When Laurie took over the training of my 9-month old puppy, he had already been through 2 rounds of puppy school. Obviously, they had been failures. Laurie showed us how to get him under control using positive reinforcement as his main reward. He now… END_OF_DOCUMENT_TOKEN_TO_BE_REPLACED

Gracie participated in two classes. Laurie is very knowledgable about dog training, very patient with owners and clearly loves her work. I especially remember the lesson about the settle mat. Laurie kept telling me to “wait, wait, she will figure i… END_OF_DOCUMENT_TOKEN_TO_BE_REPLACED

Our family used Laurie Luck and Smart Dog University for training both of our very active labs. Laurie was amazing at helping our entire family learn to train and work with the dogs. The most helpful thing for us about both the group classes and in-h… END_OF_DOCUMENT_TOKEN_TO_BE_REPLACED

The knowledge SDU provided is invaluable. Laurie’s willingness to share her calm logic and vast knowledge and patience about how to raise a happy dog (and happy dog people) has created harmony we did not have before. A big thanks to my sister who… END_OF_DOCUMENT_TOKEN_TO_BE_REPLACED