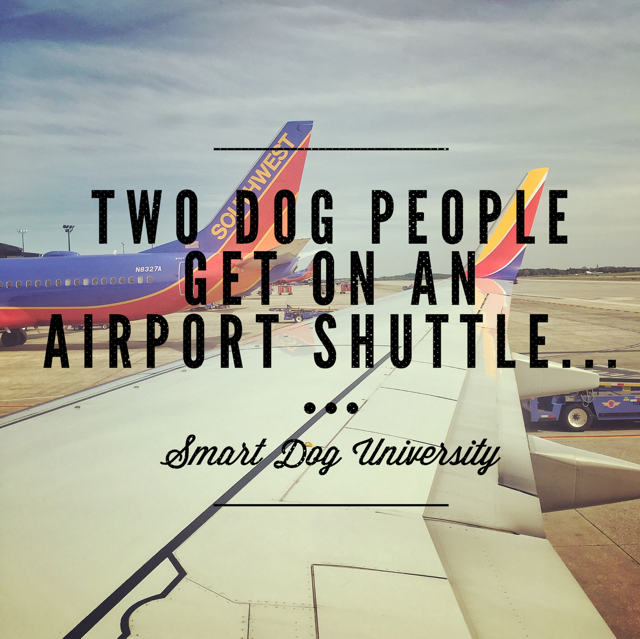 I was on a rental car shuttle bus, just making my way back home from a working weekend.

The shuttle driver throws out a question to the two women on the shuttle (of which I am one).

“So who is the dog show judge?”

I don’t say a word. I’m wondering how he knows I’m into dogs. I mean, he got the title wrong, but yes, I’m here to teach dog training.

So I’m quiet as a church mouse, keeping my head down, hoping to avoid detection, when — to my surprise — the other woman says “Oh, that’s me! How did you know I was an AKC judge?” Huh, two dog people randomly on the same airport shuttle — what are the chances.

Apparently she wears her passion on her luggage, because the guy said her luggage gave her away (I didn’t even look, hoping to avoid detection).

I’m feverishly surfing my phone, attempting to stay under the radar, out of the conversation. The two talked dogs, breeds, mixes, etc. I’m an extrovert, it’s hard for me to shut up anyway, let alone talk about DOGS.

But I’ve learned my lesson. The hard way. Let a stranger find out you’re a dog trainer and you’re their best friend for however long you’re in their vicinity. It’s not that I don’t like talking about dogs. I love talking dogs — especially with dog people! It’s the debate over training methods that causes me angst. Dog training is a lot like religion and politics: best not to talk about it in mixed company.

I was tight lipped, engrossed in my phone.

Until the AKC judge looked at me and saw my shirt. She recognized Karen Pryor’s name (I was running a KPA dog training workshop in St. Louis that weekend) and was wearing a KPA logo shirt.

Asked if I was Karen (hahahahahah, I wish) and then declared “I really like clicker training, but it didn’t work for us.”

To which I wanted to respond “Yes, I get it. Gravity sounds nice, but it just doesn’t seem to work for me.”

I laugh when I hear people say things like that. To be fair, many of them follow up with “I know it was me, not the dog, but I just couldn’t get it to work for me.”

To those people, I am thankful. They understand that it was the application of the science, not the science itself that was faulty. I’m the first to admit, clicker training isn’t always presented simply. There’s some (totally false) mysticism surrounding clicker training that I work to dispel every day.

When it was clear that both of us were heavily into dogs, the inevitable question from the “who’s the dog judge” guy was “So what do you guys think of the Dog Whisperer?”

It’s taken me a few years to hone my expressionless face. But I have it nailed down pretty good now. Dog Judge Lady looks at me, rolls her eyes, and sighs. I say to the guy “He’s entertaining!” as I smile broadly.

I continue “It’s kind of like the HGTV shows that show the house renovations in 60-minutes. You KNOW it took way more than 60 minutes and that the guys hosting the show did almost none of the work. But man, was it entertaining and did it look good!”

The two of us didn’t agree on clicker training, but man did we bond over reality tv dog training. It was gratifying to know that people from opposite sides of the fence could find something on which we could agree and then used that as a springboard to talk about other topics within the dog world.

Should you get littermates? I don't usually get this question. Normally, I hear "Help, we got littermates!" That comes after the littermates are already home and the people are feeling understandably … END_OF_DOCUMENT_TOKEN_TO_BE_REPLACED

When Laurie took over the training of my 9-month old puppy, he had already been through 2 rounds of puppy school. Obviously, they had been failures. Laurie showed us how to get him under control using positive reinforcement as his main reward. He now…

Laurie’s group class was perfect for my distractible social butterfly pup (aptly named Zippy)! Her positive training methods make learning as much fun for the humans as for the dogs. Training is a lifelong (daily) bonding adventure, with Laurie’s…