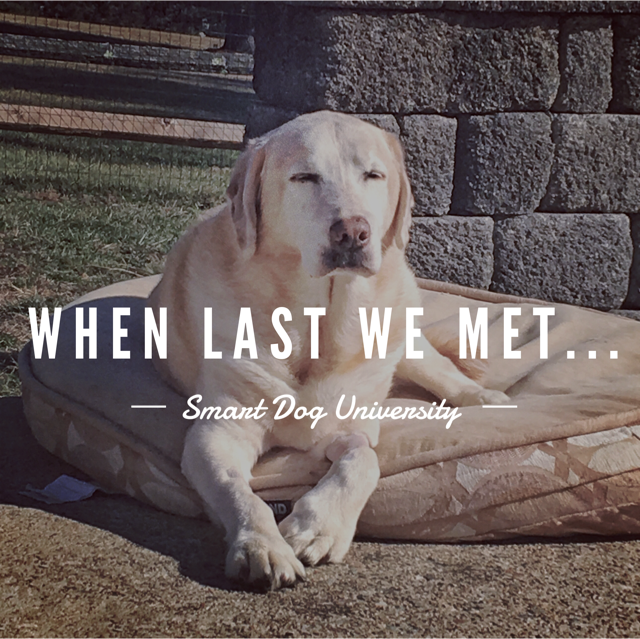 When last we met, Tango had urgent surgery to remove his spleen and an unwelcome growth on said spleen.

Since then, we’ve had very few “up” days and a whole lotta “down” days, including a panicked trip (a week ago now!) to my regular vet and a trip later that same evening to the emergency veterinarian where I had to <gasp> leave Tango for the night.

Tango has been diagnosed with cancer, but the pathology results confound the pathologists and oncologists.

Originally, there were three contenders for the type of cancer — all round cell cancers (don’t ask me what that means, it’s just something I heard the veterinarians say). Which meant, I think, that we’d treat the cancer the same way, but that the prognosis could be vastly different depending on which round cell cancer.

We ordered special stains that would identify which of those three possibilities Tango really had.

It takes 10 unimaginably long days to get results. The results added three new potential diagnoses to the mix. So now, 25 pathologists from the laboratory will meet at the end of the week and review Tango’s case. The oncologist said that some of the new possibilities are less scary than the ones already in the mix, so keep your fingers crossed for the least scary of the bunch.

About a week ago, Tango developed an incision-site infection.

Waiting together at the veterinary office.

He had a fever and was trembling uncontrollably which is how we ended up panicked at my veterinarian’s office. At the time, I didn’t know it was “just” an infection, I was worried it might be cancer-related. I was certain this was it for him, he was so miserable and I hated seeing him that way.

I spent the better part of the day at my regular veterinarian (who fit me in, mercifully) getting Tango’s fever under control and making him comfortable.

When we left the office at about 2:30p, Tango was looking better. I wasn’t worried at all when I had to leave him just a couple hours later to teach back-to-back good manners dog training classes.

Imagine my shock when my husband called me during class (which never happens) and said urgently “Where do I take this dog – we need an emergency vet. Now.” Tango had begun trembling again, was unable to lift his head, and was leaking all kinds of fluid from the incision site (serous fluid, I later learned — what an education I’m getting!).

I really do have the best clients in the world.

They were understanding, even encouraging me to stop class and get my husband the information he needed. Which I did. Which also involved a couple of extra calls to my veterinarian for some in-the-moment advice. Through it all, they were the best — supportive and understanding.

To make a long story short, my husband met me at my class location (which had since finished) and together we took Tango to an emergency veterinary hospital.

Tango had to stay the night <gasp!>. It was the first time I ever had to leave him behind. It was horrible on both of us. I was able to pick him up the next day and things started to get back to normal.

A week later (fingers crossed!) and we’re returning to somewhat normal around here.

Any day that involves a Kong is a good day!

Tango is again waking me up in the morning (too early!). He’s eating Kongs. He’s wagging his tail. He’s going out to meet my husband at the gate when he hears him come in the driveway. It’s the little things.

We have a meeting with the oncologist on Monday to see what the passel of pathologists have come up with regarding Tango’s cancer. And we’ll move forward from there. Who’d have ever thought I’d be happy to move forward with the “normal stuff” like cancer treatment. It’s all perspective, I guess.

Should you get littermates? I don't usually get this question. Normally, I hear "Help, we got littermates!" That comes after the littermates are already home and the people are feeling understandably … END_OF_DOCUMENT_TOKEN_TO_BE_REPLACED

Our family used Laurie Luck and Smart Dog University for training both of our very active labs. Laurie was amazing at helping our entire family learn to train and work with the dogs. The most helpful thing for us about both the group classes and in-h… END_OF_DOCUMENT_TOKEN_TO_BE_REPLACED

Working in the veterinary field has shown me how important positive reinforcement training for dogs is. When it came time to train my own dog, Quincy, Smart Dog University was my choice for training. Laurie is a calm force and true dog lover! Two yea… END_OF_DOCUMENT_TOKEN_TO_BE_REPLACED

The knowledge SDU provided is invaluable. Laurie’s willingness to share her calm logic and vast knowledge and patience about how to raise a happy dog (and happy dog people) has created harmony we did not have before. A big thanks to my sister who… END_OF_DOCUMENT_TOKEN_TO_BE_REPLACED

When Laurie took over the training of my 9-month old puppy, he had already been through 2 rounds of puppy school. Obviously, they had been failures. Laurie showed us how to get him under control using positive reinforcement as his main reward. He now… END_OF_DOCUMENT_TOKEN_TO_BE_REPLACED

Laurie’s group class was perfect for my distractible social butterfly pup (aptly named Zippy)! Her positive training methods make learning as much fun for the humans as for the dogs. Training is a lifelong (daily) bonding adventure, with Laurie’s… END_OF_DOCUMENT_TOKEN_TO_BE_REPLACED

Laurie is someone Your Dog’s Friend depends on for good information on dog behavior and training presented in an engaging, understandable way. She has done free workshops for us; we have used her articles in our newsletter; and she is a trainer who… END_OF_DOCUMENT_TOKEN_TO_BE_REPLACED