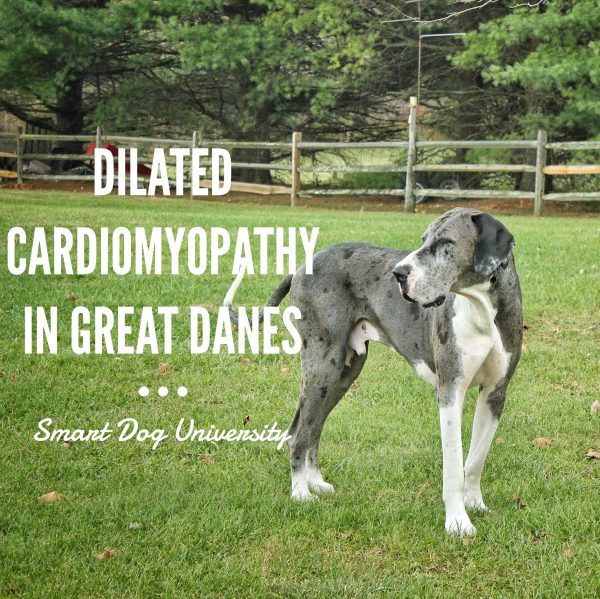 Schooner, our Great Dane, was diagnosed with dilated cardiomyopathy.

It was quite a blow to us.

He’s relatively young (not yet 5 years old) and until very recently has been healthy and athletic. I run with Schooner and I’d noticed that on the last two runs he’d been slower than normal.

In hindsight, I think he’d been having the problem since at least June, but I chalked it up to heat intolerance, not heart trouble. But when Schoons’ lethargy expanded to his daily routine — not just our runs — I got worried.

I was sure he had some kind of doggie flu — bronchitis or pneumonia — but he certainly wasn’t seriously ill. The veterinarian seemed to spend an inordinate amount of time listening to his heart, which seemed odd. We have been in the veterinary office fairly frequently due to a pesky toe infection and his heart hadn’t caused the veterinarians any concern previously. You could have knocked me over with a feather when the veterinarian said “I’m concerned” and “arrhythmia” and gave us a referral to a cardiologist.

Like a good little Dane owner, I trotted Schoons off to the cardiologist the very next day.

That veterinarian repeated some of the same tests, along with some new ones, and dealt the blow: advanced dilated cardiomyopathy (DCM) with the complication of arrhythmia. The DCM is bad enough — it’s fatal for cripes sake — but the arrhythmia is the scariest piece because it increases the likelihood of sudden death.

We experienced sudden death with Nemo almost exactly a year ago and, to be honest, I’d rather not go through that ordeal again. We didn’t know there was anything wrong with Nemo when he died, but now, learning about Schooner’s condition, I wonder if that’s why Nemo died suddenly. Looking back, I remember Nemo having some of the same symptoms. They were so subtle, though, that I chalked them up to the normal aging process. Neems had just turned 11 when he died — I thought he was simply slowing down due to his age.

Anyway, I digress. Schooner is now not allowed (nor is he capable) of running with me.

I am surprised at how much I grieve this single thing. He was so fun to run with. His pace matched mine exactly. His leash manners were impeccable — he always ran next to me with a loose leash.

I run the roads, so it’s important for me to be able to get onto the shoulder quickly if a car is approaching. As you might imagine, with a giant dog, it’s even more crucial that I (1) get out of the way and (2) do it quickly. Schooner and I had developed a really nice silent communication system over the year or so that we ran together. When a car was approaching, I simply laid the leash on his right shoulder to move off the road. He was as elegant as a dressage horse, moving onto the shoulder without ever breaking stride. After the car passed, we silently moved back up onto the road as easy as you please.

Running solo carries a bit of a risk, especially for a woman on country roads. When I had Schooner as my running partner, I never worried about my safety. He’s a friendly chap, but his size alone is enough to deter anyone from getting too close. Cyclists would often cross our path and I loved Schooner’s steadiness. If they stopped to talk to us, Schoons was happy to accept some ear rubs and kind words. But if the cyclists were on a mission and only gave us a “hello,” Schooner never tried to visit or pull away from the pack of cyclists.

I ran a couple of races with Schooner.

Our first was a turkey trot on Thanksgiving day in 2016. It was a dog-friendly race and I admit I was a little nervous. I’d never had Schooner in a crowd of 2,000 people. Who were running. At the same time in the same direction. Some with their own dogs.

He did great! After that first race, I was hooked on running with Schoons. If he could handle that race, he could handle anything! We trained together a lot that winter and spring. But by summer, he was intolerant of the heat, so he stayed home while I ran. Then, when fall brought cooler temperatures, I took him out again. But that’s of course when I noticed his lethargy.

And so here we are.

Schooner is still allowed to walk. And while he’s technically not allowed to chase squirrels in the backyard, he still does. Yes, the “burst activity” could kill him. But honestly: what dog would be sad if he died chasing a squirrel!?

We don’t have a prognosis for Schooner, but the (many) medications he’s on have helped considerably. He’s playing again — throwing around toys, more energetic, looks like he’s feeling peppy again. So, while this is not what I’d hoped for, it’s certainly better to know about it and help him live longer and happier. We will have regular check-ins with our veterinarians and with the cardiologist. Hopefully, we’ll have a prognosis in about three months after the cardiologist evaluates Schooner’s improvement with medication.

I hope it’s obvious, but I’m not a veterinarian and nothing you read here or on this blog constitutes veterinary advice or recommendations. Jeez, I thought Schooner had the flu when it turned out he had a fatal heart ailment, for goodness sake. Always see your veterinarian for advice on the health of your pet.

Veterinarians are doing some really specific research on Great Danes and dilated cardiomyopathy.

And you can help! If you have a Great Dane — pedigreed or rescued — researchers at NC State need your dog’s DNA to help build their database. Samples are needed from healthy Danes as well as those diagnosed with DCM. It’s easy to contribute a sample, all the details are here.

Should you get littermates? I don't usually get this question. Normally, I hear "Help, we got littermates!" That comes after the littermates are already home and the people are feeling understandably … END_OF_DOCUMENT_TOKEN_TO_BE_REPLACED

Our family used Laurie Luck and Smart Dog University for training both of our very active labs. Laurie was amazing at helping our entire family learn to train and work with the dogs. The most helpful thing for us about both the group classes and in-h… END_OF_DOCUMENT_TOKEN_TO_BE_REPLACED

Working in the veterinary field has shown me how important positive reinforcement training for dogs is. When it came time to train my own dog, Quincy, Smart Dog University was my choice for training. Laurie is a calm force and true dog lover! Two yea… END_OF_DOCUMENT_TOKEN_TO_BE_REPLACED

The knowledge SDU provided is invaluable. Laurie’s willingness to share her calm logic and vast knowledge and patience about how to raise a happy dog (and happy dog people) has created harmony we did not have before. A big thanks to my sister who… END_OF_DOCUMENT_TOKEN_TO_BE_REPLACED

When Laurie took over the training of my 9-month old puppy, he had already been through 2 rounds of puppy school. Obviously, they had been failures. Laurie showed us how to get him under control using positive reinforcement as his main reward. He now… END_OF_DOCUMENT_TOKEN_TO_BE_REPLACED

Laurie’s group class was perfect for my distractible social butterfly pup (aptly named Zippy)! Her positive training methods make learning as much fun for the humans as for the dogs. Training is a lifelong (daily) bonding adventure, with Laurie’s… END_OF_DOCUMENT_TOKEN_TO_BE_REPLACED

Laurie is someone Your Dog’s Friend depends on for good information on dog behavior and training presented in an engaging, understandable way. She has done free workshops for us; we have used her articles in our newsletter; and she is a trainer who… END_OF_DOCUMENT_TOKEN_TO_BE_REPLACED