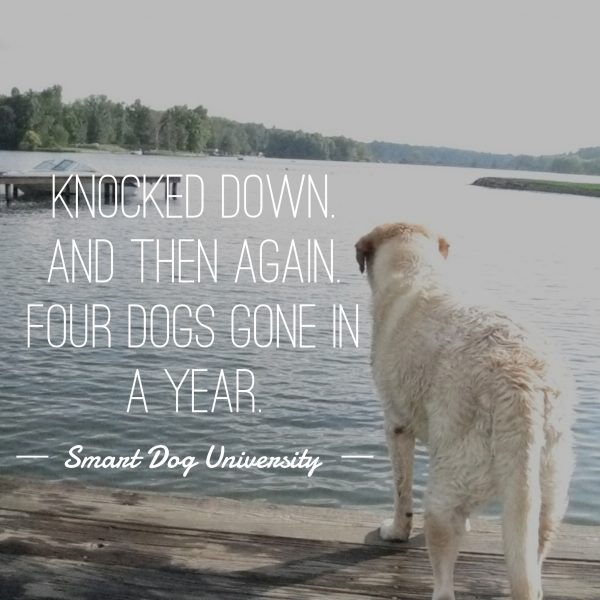 I’ve had “write blog post” on my daily schedule for the last six days. I keep moving it.

Regular readers (ha, as if I’ve been a regular writer) know that for the past thirteen or so months, my life has been more personal and less business.

It started when our 11-year old “healthy” dog, Nemo, died suddenly as he was walking into the house one afternoon.

That rocked me back on my heels and sort of set the whole family adrift.

Then, I took Tango to the veterinary hospital for drinking too much water and we wound up with same-day splenectomy surgery and an eventual two-cancer diagnosis.

Tango’s health was up and down for a few months, then things evened out.

We had a good summer until Lily took a turn for the worse.

We’d been dealing with canine cognitive dysfunction for over a year and with, I think degenerative myelopathy. She was a trooper and didn’t quit until she finally couldn’t stand on her own. It happened suddenly and we called the veterinarian to come that very day. She had a great 15.5 years, but it was still difficult to say goodbye to that sweet girl.

That was tough. Especially knowing that Tango was up against severe osteoarthritis and two different types of cancer. Thank goodness Schooner was in good health.

Tango stayed steady into the fall.

He was on medication four times a day, was still getting massage and laser to help with the osteoarthritis, and seemed to be coasting along, with an occasional off-day (which I watched like a hawk). He was doing well enough that we felt comfortable enough to go on vacation and leave Tango and Schooner with a wonderful house sitter and a friend who took excellent care of both the dogs.

In mid-November, Schooner was lethargic and had a slight cough.

I thought he had the dog flu. I took him to the veterinary hospital hoping to get some antibiotics to help him feel better. Imagine my shock when I was told he had an arrhythmia and was given a referral to a cardiologist. The diagnosis dealt another blow: dilated cardiomyopathy.

The cardiologist wouldn’t give us a prognosis but said sudden death was possible.

We started an intense medication regimen for Schooner, hoping to buy some time.

In December, Tango started a slow, but steady decline.

He was less able to maneuver through the house. I added a ramp so he could go outside more easily. I bought orthopedic beds. Still, he was moving less. His tail still wagged, but even that was becoming less frequent. One evening he didn’t want his dinner.

We said goodbye to Tango on December 13 at home.

Tango was my favorite, he was my business partner, and my best friend. I felt as if I’d been run over by a semi-truck.

We made it through Christmas with just Schooner.

To be honest, we started our holiday celebration early after Schooner’s diagnosis because we didn’t know how long we’d have him. The medication seemed to be making Schooner feel normal again. And, like Tango, we dropped into a steady “new normal” routine.

Things seemed to be going so well, I had let myself forget that he had a fatal heart diagnosis.

I had to travel to ClickerExpo to present some talks and we didn’t want Schooner home alone during the day for so many hours, plus he needed mid-day medication. On January 16, I took Schoons to my parent’s place on Lake Anna and came home the next day to fly out to California.

As I was boarding the plane, I got a call from my dad telling me Schooner had just collapsed.

I didn’t know it then, but Schooner died immediately. And there I was, boarding a flight that would take me 3,000 miles away for the next eight days. It was, without a doubt, one of the worst days of my life. Helpless, lost, heartbroken, numb — all those words described my state of mind.

I plan to write something special for both Tango and for Schooner.

In fact, I finally felt ready to write about Tango and had planned to write on the long flight to California. As circumstances were, I had two glasses of wine and concentrated on not collapsing in a heap on the plane.

I strongly believe Tango and Schooner need a tribute.

And I’ll get to those later this week.

Should you get littermates? I don't usually get this question. Normally, I hear "Help, we got littermates!" That comes after the littermates are already home and the people are feeling understandably … END_OF_DOCUMENT_TOKEN_TO_BE_REPLACED

When Laurie took over the training of my 9-month old puppy, he had already been through 2 rounds of puppy school. Obviously, they had been failures. Laurie showed us how to get him under control using positive reinforcement as his main reward. He now… END_OF_DOCUMENT_TOKEN_TO_BE_REPLACED

The knowledge SDU provided is invaluable. Laurie’s willingness to share her calm logic and vast knowledge and patience about how to raise a happy dog (and happy dog people) has created harmony we did not have before. A big thanks to my sister who… END_OF_DOCUMENT_TOKEN_TO_BE_REPLACED

Laurie is someone Your Dog’s Friend depends on for good information on dog behavior and training presented in an engaging, understandable way. She has done free workshops for us; we have used her articles in our newsletter; and she is a trainer who… END_OF_DOCUMENT_TOKEN_TO_BE_REPLACED

Working in the veterinary field has shown me how important positive reinforcement training for dogs is. When it came time to train my own dog, Quincy, Smart Dog University was my choice for training. Laurie is a calm force and true dog lover! Two yea… END_OF_DOCUMENT_TOKEN_TO_BE_REPLACED

Our family used Laurie Luck and Smart Dog University for training both of our very active labs. Laurie was amazing at helping our entire family learn to train and work with the dogs. The most helpful thing for us about both the group classes and in-h… END_OF_DOCUMENT_TOKEN_TO_BE_REPLACED

Laurie’s group class was perfect for my distractible social butterfly pup (aptly named Zippy)! Her positive training methods make learning as much fun for the humans as for the dogs. Training is a lifelong (daily) bonding adventure, with Laurie’s… END_OF_DOCUMENT_TOKEN_TO_BE_REPLACED

Laurie Luck has twenty years of immersion in the World of Dogs. She earned a M.A. in psychology, served as President of the Certification Council for Professional Dog Trainers (CCPDT), and is Faculty at Karen Pryor Academy for Animal Training and Behavior. A speaker at local and national educational events, Laurie is forever open to learning. In addition, Laurie raises puppies for a service dog organization, and loved nothing more than to work with her Labrador, Tango, as a certified therapy team.
Return to top of page
Copyright © 2022 Smart Dog University · Website design by PC Creative, development by Datachieve Digital